Maintaining healthy gut flora is what Align Probiotic is all about. But, is there a connection to weight loss? Let’s find out by taking a detailed look into potential side effects, ingredients, and research supporting the claims. We’ll take into account positive and negative experiences from actual users. Then, we’ll give you simply the facts.

Align Probiotic can be purchased through their Official Site.

What is Align Probiotic?

Align Probiotic is a natural supplement designed to support digestive health as well as trigger weight-loss. What are the ingredients in Align Probiotic? The ingredients are B. infantis (Bifidobacterium infantis 35624), microcrystalline cellulose, magnesium stearate, and milk protein. B. infantis is a trademarked probiotic exclusively found in Align. Varieties of the supplement include chewables and resistance formula.

Align is distributed by Procter & Gamble, a company founded in 1837 and headquartered in Cincinnati, Ohio. There is no question; this multi-billion dollar company knows that it’s doing at this point. Their products can be purchased online or at several major retailers such as Walmart, CVS, and Costco.

Align Probiotics offers some different variants of their product, some of which include:

We like the fact that there’s a popular company behind the product and the claims of this supplement seem pretty legitimate, but let’s keep on…

The first problem we found when researching Align Probiotic Amazon was with effectiveness. “This product has a great rating, but there were more complaints regarding efficacy than we were expecting,” said our Research Editor.

“It made no difference if I took it or not. Would not reorder,” said one user.

“I gave this stuff a serious try. I used it as directed, and I used it for several months. It didn’t seem to help me at all,” wrote another.

On the other hand, as our Research Editor pointed out, there were many positive reviews. Additionally, the National Center for Complementary and Integrative Health says probiotics can have many beneficial effects, like improving immune response and gastrointestinal issues. 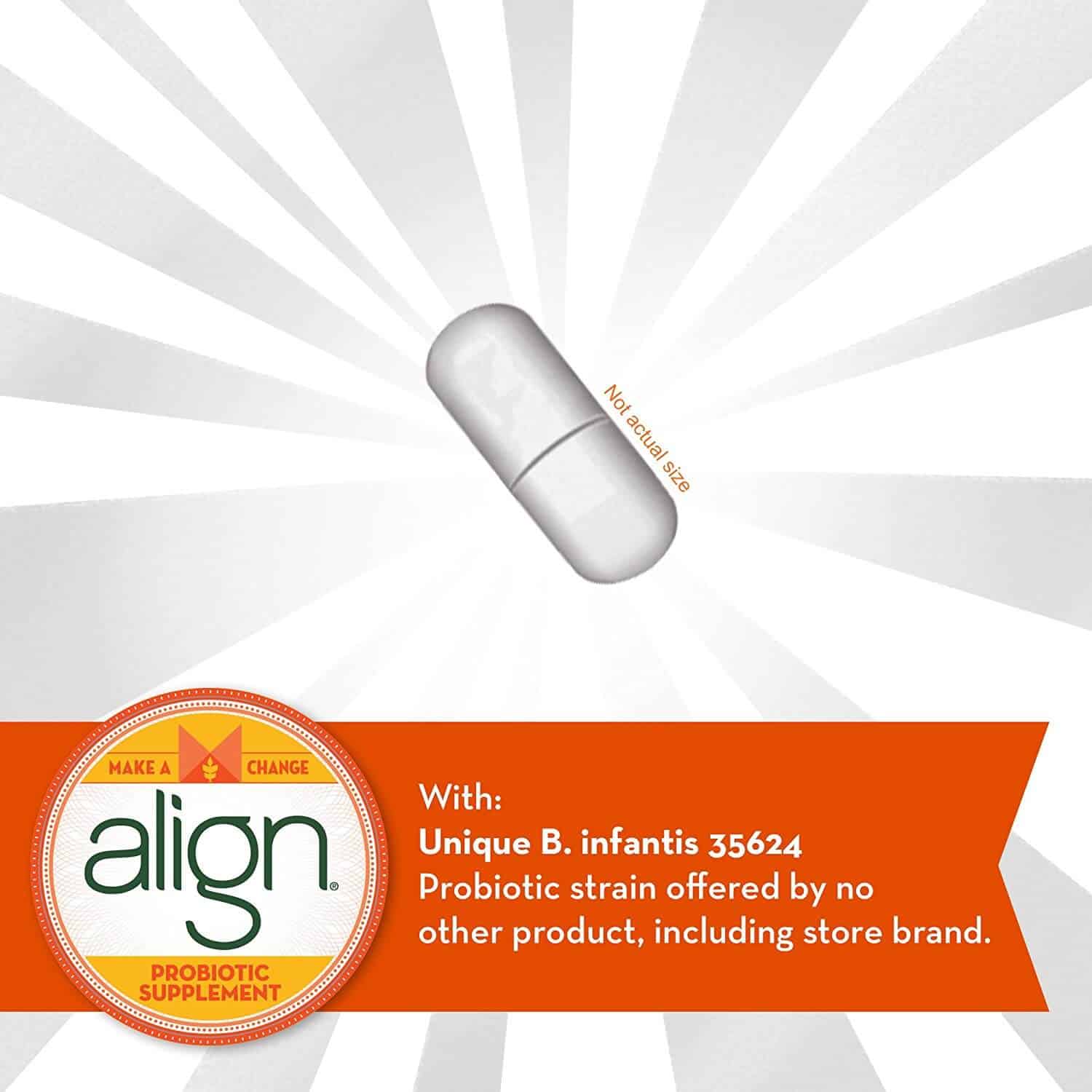 Quality – “Is There an Alternative?”

Based on a few reviews, there are concerns with the quality of Align Probiotic ingredients. It seems that customers aren’t thrilled with the ingredients or feel as if there is a cheaper, better alternative out there.

“Yakults or any of the imitations are much cheaper and tastier,” wrote another.

To others, it was exactly what they wanted – “Yes, it did the trick! The bloating has gone and I feel confident that my intestinal bacteria is in the balance. I plan on re-ordering.”

In all of our years in this field, we can safely say that one small issue with a supplement can ruin any chance for measurable, long-term results. In this case, if Align Probiotic is ineffective or there are cheaper and more effective alternatives, it could pose a real threat to your success.

The Science – “The Research Behind B. infantis”

We’ll say right now that there are no scientific studies on this product itself.

A class-action lawsuit filed in 2011 that claimed deceptive credit card processing was settled in 2018 with checks being sent to the claimants in early 2019. Each person named in the lawsuit could receive a check of up to $49.

“No Complaints, Just Compliments – Align has given me just what the doctor ordered. I feel so much better since adding Align to my daily routine.”

“Not as effective as previously – Appears to contain different active strain from original Align.”

“Great for my digestive system – Been using this brand for 5 years and I cannot go without them.” 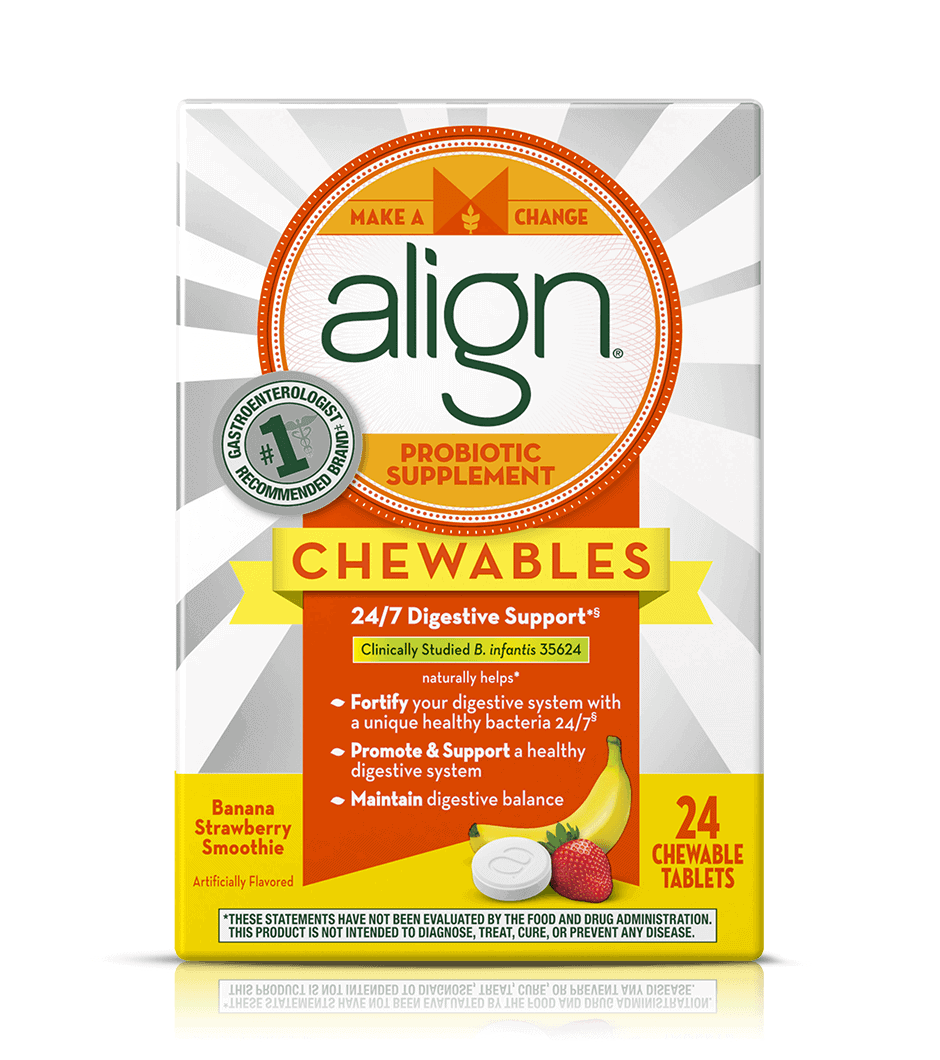 So will this probiotic help with your digestive health and weight-loss? A lot of consumers out there stand by it, and we do like the scientific evidence that backs the main ingredient. We’re just torn on the comments regarding efficacy and quality. If there’s a better option out there, remember to look for Align Probiotic coupons or discounts.

Digestive health is an important part of weight loss. But, if you’re looking to lose weight, you should turn to a weight-loss program with tons of great reviews.

One of the best we’ve found this year is called Noom. It’s a combination of human interaction through one-on-one support and more traditional tools like food logging and exercise tracking that helps this app stand apart from the competition.

They even have a free trial offer going on to show their confidence in the product. 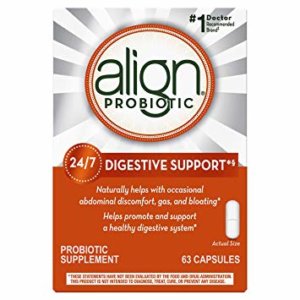 clear
Q:
What are the ingredients in Align Probiotic?
A:

Q:
What are the side effects of Align Probiotic?
A:

The side effects of Align Probiotic include gas and bloating, but the side effects are only temporary because your system is adjusting to the supplement.

Q:
Does Align Probiotic work?
A:

Customers who have reviewed the supplement on the official Align website have stated that the brand does work. It settles their stomach, keeps them regular and lasts throughout the day.

Q:
What is the price of Align Probiotic?
A:

Q:
Where can I buy Align Probiotic?
A:

Align Probiotic can be found on the official Align website and health department of Amazon. You can also buy it over-the-counter from retail stores or order it through your pharmacy.

Q:
Where can I buy Align Probiotic?
A:

Align Probiotic can be purchased using their Official Site.

Q:
How should I take Align Probiotic?
A:

It is best to follow the usage instructions on the packaging, but you can take Align Probiotic at any time of the day and with or without food.

Q:
How do I contact Align Probiotic customer service?
A:

You can contact the customer service by calling 1-800-208-0112, sending them an email or using the live chat on their official website.

Q:
Can I return Align Probiotic?
A:

Align offers a money-back guarantee if you are not satisfied with their products. All you need to do is mail in the original UPC, original receipt and your full name and address. You must send in these materials within 60 days of the original purchase date.

Q:
What are the most common complaints about Align Probiotic?
A:

The most common complaint from Align Probiotic customers is not feeling much of a difference after taking the supplement.