Brazilian Bum Bum Cream can be purchased through their Official Site.

What is Brazilian Bum Bum Cream?

Brazilian Bum Bum Cream (Brazilians pronounce it “boom boom” cream) is a fast-absorbing body cream. It is rich in guaraná and a native Amazonian plant that contains caffeine. The cream helps lighten and smooth skin for a beautiful Brazilian glow.

The main ingredient, guarana, is a source of caffeine. What does science say about caffeine creams and cellulite?

Heela Yang, a New Yorker who was born in Korea, fell in love with a man from Brazil. They moved to his home country, and Heela fell in love for a second time. This time, it was with Brazilian beauty products.

Heela Yang decided to create a body-positive company that embraced Brazilian culture. She teamed up with Marc Capra and Camilla Rose to launch the brand that would become Sol de Janeiro. Brazilian Bum Bum Cream was their first product.

Other products from this line include:

The makers of Bum Bum Cream claim that the formula:

Guaraná
Guaraná, a plant found in the Amazon, contains five times the caffeine of a regular coffee bean. Caffeine can constrict blood vessels, draw excess fluid out of fat cells, and reduce inflammation, according to research in the International Journal of Vascular Medicine. They caution that the results from cellulite creams containing caffeine are not permanent.

Coconut Oil
The oil extracted from raw coconuts is made up of saturated fat. Research shared in the journal Dermatitis concluded that coconut oil is just as effective as mineral oil for hydrating dry skin.

Guayusa
Guayusa is a natural caffeine source. It is used in artisanal beverages and ceremonial drinks.

Brazil Nut
Brazil nuts are seeds that contain selenium. Brazil nuts have been shown to have anti-inflammatory effects when eaten, but no studies have looked at the benefits of using Brazil nuts topically.

Cupuaçu Butter
Cupuaçu Butter is an emollient often called the Amazon’s version of shea butter. It smells like cocoa and is often used to make juice and desserts.

Brazilians use body creams that are rich in guarana, a native Amazonian plant. Guarana is a natural source of caffeine. There is some evidence to suggest that caffeine is beneficial to our skin. According to 2013 research published in the journal Skin Pharmacology and Physiology into the effect topical caffeine has on the skin, it is shown that this anti-cellulite ingredient also has antioxidant properties, which can fight the signs of aging.

We found no evidence that topical creams can penetrate the skin and reach fat tissues under the dermis before being absorbed by the body. This lack of evidence suggests that any effects observed after using topical cellulite creams are only temporary.

How to Use Brazilian Bum Bum Cream

Apply the cream liberally. It can be used anywhere on your body.

This product contains Brazil nuts. An allergic reaction is possible.

Cost and Where to Buy Brazilian Bum Bum Cream

Selling Brazilian Bum Bum Cream – Sephora, Amazon, and eBay. You can expect to pay about $10-$20 per jar.

Brazilian Bum Bum Cream can also be purchased on the official website for $45.

“I love how this cream smooths out my skin. A little bit goes a long way. And it smells amazing all day long. Visible smoothness for craepy skin.

“All Hype – I received a sample of this cream in my Allure beauty box, and it does smell nice and all, it definitely does NOT firm or tone anything since it contains very little guarana. I suggest a cream or body scrub with high amounts of caffeine or coffee if you’re seeking more toning or firmness. Along with using one of those cellulite brushes or massage rollers will also help! If you’re looking to smooth stretch marks, straight cocoa butter is best. As well as coconut oil, and any other oil with vitamin E or jojoba. Way cheaper products out there that will offer much more than just a nice smell.”

“When I purchased the Sol Cheirosa ’62 parfume, it was suggested that I purchase the Sol de Janeiro Bum Bum Cream. I’m so glad I did because this cream is just heavenly! I use it first, then layer it with the parfume for an all day fragrance. The creaminess and thickness is exactly as described and I am not disappointed! It even arrived on time! My only problem was that I don’t have a front porch and the delivery person left my package on the ground near the front door without knocking to alert me. It could have been stolen or stepped on. I didn’t like that, but I sure do love my cream and it’s beautiful scent! Thanks so much!”

Brazilian Bum Bum Cream seems like a decent product. There is even some evidence to suggest that it will temporarily diminish stretch marks and cellulite, but no cream or lotion can replace a healthy diet and regular exercise.

If you really want to change the shape of your body, you have to start eating a balanced diet and hit the exercise regularly. We live in a fast-paced world, and sometimes it’s difficult to stick to your routine. A quality weight-loss app can increase your chances of succeeding on your journey, but how do you know which app is right for you?

Our research team reviews hundreds of products, and we can’t get enough of Noom. It is a quality weight-loss app that uses unique tools like one-on-one coaching and human interaction to maximize your weight-loss results.

The company that developed Noom is confident that this product works, so they don’t have to use gimmicks to make sales. They even offer a free trial offer to Dietspotlight readers. 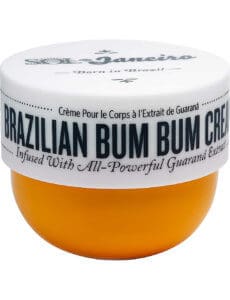 Brazilian Bum Bum Cream is used for women who want to reduce the appearance of cellulite.

Q:
What are the Brazilian Bum Bum Cream ingredients?
A:

Q:
Are there Brazilian Bum Bum Cream side effects to know about?
A:

If you are allergic to Brazil nuts, avoid this product.

Q:
Did you find any Brazilian Bum Bum Cream product warnings?
A:

The only product warning associated with Brazilian Bum Bum Cream is that those with Brazil nut allergies should not use them.

Q:
Is Brazilian Bum Bum Cream for men or women?
A:

Q:
Where can I buy Brazilian Bum Bum Cream?
A:

Q:
Where can I buy Brazilian Bum Bum Cream?
A:

Brazilian Bum Bum Cream can be purchased through the company, Sol de Janeiro.

Q:
Is there a Brazilian Bum Bum Cream free trial or free samples?
A:

There are no free trials or samples for Brazilian Bum Bum Cream.

Q:
What is the most common Brazilian Bum Bum Cream complaint?
A:

The biggest complaints associated with Brazilian Bum Bum Cream are the price and that the effects are temporary.