We’re hearing a lot of buzz about Defcon 1. We decided to take an in-depth look at ingredients, side effects, clinical research and customer service. Additionally, we dissected hundreds of customer comments and reviews. Then, we refined and summarized to give you the info you need.

Defcon 1 can be purchased through their Official Site.

Defcon 1 Readers: Noom is offering our readers a free trial, for a limited time. Click here for this special offer!
Overview

What You Need to Know

First off, Defcon 1 is a preworkout powder containing beta alanine, taurine, creatine HCl, caffeine anhydrous, theobromine, and more. It also comes in multple flavors, including Australian Summer, Pineapple, Tiger Blood, and Watermelon. After mixing one scoop with water and consuming once per day, the supplement supposedly increases energy levels. The portability is considered one benefit.

The product was introduced in 2013 by Platinum Labs and appears to contain some natural ingredients, a plus. The company also released a “Black Label” version of the product. Trusted retailers and the official website sell the supplement. We like the low price tag and that we located some positive customer comments, but read on…

The first negative was the severity of Defcon 1 side effects. “There’s nothing in the supplement handbook that says you have to take a product that makes you feel sick to boost workout performance,” said our Research Editor.

“I definitely didn’t like it. This is the one that made me feel sick,” said a user.

“This preworkout is not very strong, but for some reason it would leave me lying in bed, with my heart pounding, unable to sleep,” commented another.

Users commenting on the web stated Defcon 1 ingredients tasted bad. “This preworkout taste like crappy medicine and was really hard to drink down,” said a customer.

“Smells and taste like Vicks vapor rub. There is no way this can be the real deal. Is supposed to taste like pineapple,” reported a user.

“The taste is surprisingly very bad and the smell as well, I mean I don’t care much about the taste of sups usually but this was a surprisingly bad taste/smell like a bad medicine taste,” commented a consumer.

All it takes is one small thing relating to a supplement, like poor taste, to put a halt to long-term success. If Defcon 1 isn’t flavorful, there are concerns.

The Science – “Any Research?”

The official website provides descriptions of the ingredients, but doesn’t offer published clinical research supporting the claims. Although not relating to this formula, we’ve found studies backing the effectiveness of caffeine. At DietSpotlight, solid science is critical. If a company can’t link to science-based facts, we turn our backs.

“Contained water – I was really looking forward to this product and purchased 2 during amazon lightning sales, but the powder inside appeared to contain water despite being sealed at the top. Not sure if this was a manufacturing fault or a storage issue.”

“Rock solid – Unfortunately the item contained water / moisture. This was disappointing and ended up in the bin.”

“I tried this and GOT NOTHING , gave it to 2 friends to try for 2nd opinion and they both felt NOTHING . Maybe try 2 scoops before I bin it, Rule 1 PRETRAIN 2.0 MUCH MUCH BETTER.”

The Bottom Line – Does Defcon 1 Work?

So, are you willing to spend your money on Defcon 1? Well, we like that we found some favorable customer comments and the formula contains a few natural ingredients, but we have concerns about it because of no published clinical research supporting the claims. We’re also skeptical due to the reports of negative side effects and the bad taste.

If you’re trying to achieve a better physique, we suggest following healthy lifestyle changes you can stick with.

One of the best in weight-loss and lifestyle apps is one called Noom. Experts provide resources and tools to guide you along the way to healthier living. There’s the option to create a personalized weight-loss plan, work with a human coach and one-on-one support – and more.

Since you’re a Dietspotlight reader, we can offer you access to a free trial of Noom for a limited time. 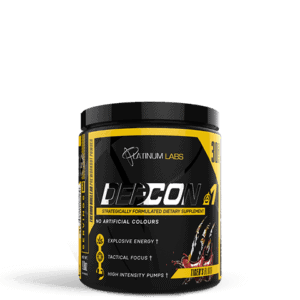 clear
Q:
What are the ingredients in Defcon 1?
A:

Q:
What are the side effects of Defcon 1?
A:

Possible Defcon 1 side effects based on the ingredients would be nausea, headaches, irritability, stomach upset, nervousness, diarrhea, increased blood pressure and rapid heartbeat.

Defcon 1 appears to work for people but not with a significant effect.

The 30 servings bottle of Defcon 1 is listed for $34.99 on the official website.

You can buy Defcon 1 on the official website, platinumlabs.com, at Amazon and from distributors including luckyvitamins.

Defcon 1 can be purchased using their Official Site.

For adults, mix one scoop in 8-12 oz water and consume 20 minutes before workouts. Don’t go beyond recommended dose or take within 6 hours to bed time.

Q:
How do I contact Defcon 1 customer service?
A:

For further inquiries you can contact Defcon 1 customer service on +1 (201) 8757440 or via email at info@platinumlabs.com. You can also use the contact form option on the official website.

This is not likely. There is no return statement on the official website.

Q:
What are the most common complaints about Defcon 1?
A:

Users complained of horrible taste and resulting side effects that makes them sick.

No votes yet.
Please wait...
Defcon 1 or Noom?
Click Here to Find Out