ProSlim Plus Review - 16 Things You Need to Know

ProSlim Plus is a diet pill designed to help its users lose weight. The makers of ProSlim Plus claim that it is “The new revolution of slimming and fitness.” A statement like that would suggest that ProSlim Plus contains a formula that is ahead of its competitors, but is there any truth to this statement?

ProSlim Plus can be purchased through their Official Site.

ProSlim Plus Readers: Noom is offering our readers a free trial, for a limited time. Click here for this special offer!
Overview

ProSlim Plus is an Asian weight loss supplement that contains natural ingredients for boosting metabolism. It’s is believed to have zero preservatives and effectively stops the conversion of carbohydrates and sugar into fat.

How Did ProSlim Plus Start?

ProSlim Plus was introduced around 2009. The supplement aims to help people lose weight who were not able to achieve much weight loss with daily work-outs and diet plans.

There are also people who do not have time to exercise and follow a diet plan. So ProSlim Plus it was introduced for basically all people looking to shed some pounds.

ProSlim Plus is formulated by Universal ABC Beauty Supply International.

It claims to burn fat by 99%, detoxify the body and make most of the advanced “nanotechnology.”

The manufactures also claim it to be the best slimming product in Japan.

However, there is no clinical evidence to support the claims made by the company.

In fact, it is believed to contain a hidden ingredient, Sibutramine that can have adverse effects on the body.

It contains several ingredients, some of which are as follows:

Lingzhi is a mushroom that was commonly known as, the “medicine of kings” in ancient Chinese cultures.

It is thought to treat various health issues such as high blood pressure, arthritis, and sarcoma.

It is one of the oldest medicinal mushrooms known to help prevent different allergic reactions.

It is a black hardwood that is used from early history to make artifacts in Egyptian culture. It is also the most costly wood known.

As far as its use is concerned, very less information is available.

However, it is commonly known to help treat malaria and ulcers, but so far no evidence exists to support this claim.

Fox-Nut is a Japanese flowering plant, eaten for its seeds that are a rich source of fiber.

In addition to this, it contains antioxidants, carbohydrates, and protein.

It effectively works as an aphrodisiac and helps produce calming effects.

Tuckahoe is a plant used by Native Americans and the Chinese for medicinal purposes.

However, so far no clinical information exists to prove its effectiveness.

A Chinese herb that is thought to treat asthma and coughing.

However, although it has been traditionally used for many years, not much scientific evidence exists to support this claim.

A Chinese herb, and again so far no scientific information is available to conclude if it is effective.

Wheat Germ is cereal that is the embryo of a seed. It contains ample amounts of minerals and vitamins, especially Vitamin E.

We have no idea what is meant by this ingredient listing. This may indicate any number of various types of ingredients.

ProSlim Plus diet pills are made of Chinese Botanicals and researched information about the effectiveness of these ingredients is not available.

Most of the additives it contains are also not considered very healthy.

Customers have also complained that this supplement is not effective and that the company keeps charging their credit cards.

In addition to this, FDA has also not approved this product.

The fact that it does not offer a money back guarantee also reflects that Proslim Plus is not as effective as claimed by the company behind it.

ProSlim Plus Benefits and Results

The alleged benefits of Proslim Plus are as follows:

As far as the results are concerned, the amount of weight one loses varies from individual to individual and also depends on various factors.

Factors for weight loss results with ProSlim Plus include:

However, some studies and customer reviews suggest that the results are seen immediately, mostly in the first few weeks of usage

Details on ProSlim Plus and Weight Loss

The ProSlim Plus diet supplement is thought to be very effective for weight loss. It works by preventing the digestion and absorption of fat by the body.

Moreover, it helps in energizing the body which means that an individual is now more active to work out.

While boosting the metabolism of the body, it ensures overall health and allows for easy blood circulation. The skin also looks younger and fresher after using Proslim Plus.

How to Use (Take) ProSlim Plus

Potential ProSlim Plus Side Effects

While the manufacturers claim that ProSlim Plus is entirely safe, not many customers are happy with it.

The official website does not show all the ingredients.

It is also not considered as safe as it claims because the product is thought to have some hidden ingredients which are not approved by the FDA.

Moreover, since it gives very rapid results, its usage is not allowed in many countries. Other side effects are:

The company behind ProSlim Plus is believed to add illegal drugs to its supplement. One of them is Sibutramine, which is considered so dangerous that it is only sold after seeing a prescription.

Some people also believe that the side-effects experienced might be because of this particular ingredient.

Most websites are also very reluctant to sell ProSlim Plus. This takes us to the conclusion that ProSlim Plus is not as safe as claimed by the manufacturer.

In addition to this, pregnant women and children are not allowed to take these supplements.

No lawsuits for ProSlim Plus exist so far, but this does not mean that it is safe to use. It should not be ignored that the FDA has not approved its usage.

The fact that no lawsuits exist may be due to two reasons.

Firstly, a list of all the ingredients that it contains is still not available which implies that it is not possible to conclude ProSlim plus is safe to use or not.

Secondly, the product is not frequently used, and not many people know about it.

If the resulting side effects are experienced at a larger scale, there may be some lawsuits on the way. However, the company’s credibility is questioned again and again.

Some people have complained their credit cards are being charged even though they have not bought the product.

Although lawsuits are not found for Universal ABC Beauty Supply, the company that makes ProSlim Plus, it did have an FDA recall of dozens of its products in 2009, News Inferno reports.

The recall is listed on the FDA Health Fraud website.

The FDA recalled the products due to an undeclared ingredient, sibutramine, being found in the products.

Sibutramine was removed from the U.S. market in October 2010. A study indicated that sibutramine causes a 16% increase in the possibility of serious heart issues, according to CMAJ JAMC.

There are several alternatives to ProSlim Plus, including:

The cons of using ProSlim Plus are as follows:

The Bottom Line – Does Proslim Plus Work?

So, what’s the final take on this one? Our look into Proslim Plus was interesting and we quickly came to a conclusion about the supplement. The company behind the diet pill has been around for a while and we did find a few positive reviews, but we have some reservations about a product that contains a prescription medication associated with some pretty harsh side effects. We’re also concerned with the voluntary recall of all bottles under FDA supervision and the lack of information on Universal ABC Beauty Supply International.

If you’re ready to start shedding those pounds, we suggest going with a lifestyle program that gives you clinically-proven tools and resources offered by a company that is transparent and there when the dieter needs them to be.

Among the best programs we’ve seen this year is one called Noom. It’s with unparallelled tools and resources that Noom sets the standard. No more restrictive dieting, no more unverified entries into food database, just professional assistance from a human coach, nutritionists and doctors.

Also, the company behind Noom is confident enough in the program to offer a free trial, not something you see every day. 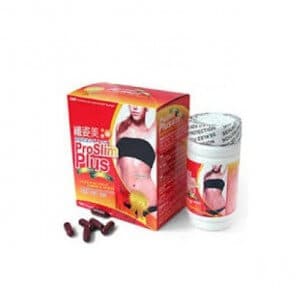 clear
Q:
What are the side effects of Proslim?
A:

Q:
What are the ingredients in Proslim Plus?
A:

Proslim Plus ingredients are Lingzhi, Fox-nut, Tuckahoe, Seman pruni, Dioscoreae, wheat germ, natural substance and Sibutramine. The last ingredient is not listed on the label, which is part of the problem with the FDA.

Q:
Does Proslim Plus Work?
A:

Proslim Plus is no longer available on the market, because it contained Sibutramine, a prescription drug used to treat weight-loss. However, the dangerous side effects, and the fact that it is not disclosed on the label present a health risk. Instead of trying to locate this supplement, or one of the many others that contain this ingredient, you may want to opt for a clinically proven safe and effective weight-loss supplement, such as Dietspotlight Burn.

Q:
How much does Proslim Plus cost?
A:

Proslim Plus is no longer on the market, so pricing information is not available.

Q:
How should I take Proslim Plus?
A:

Proslim Plus was taken as one capsule every day before breakfast with a glass of water.

Q:
Where can I buy ProSlim Plus?
A:

ProSlim Plus can be purchased using their Official Site.

Q:
When did the FDA ban this product?
A:

The FDA investigation asked the company to voluntarily recall it in April 2009. The dangerous prescription drug, Sibutramine was banned the following year.