Vitraxyn – the answer to better sexual function? It’s estimated that more than 30 million men suffer from erectile dysfunction. Some of these men have self-confidence issues and experience a lack of sex drive. Others may have issues that affects their libido. No matter what the reason for the changes in sexual function, Vitraxyn claims to be the solution. Are these male enhancement pills really a cure-all when it comes to men’s health?

There are a lot of shady products on the market advertised as male enhancement miracle drugs, so our research team scoured the internet for information on Vitraxyn. We think you’ll be surprised by what we came up with.

Vitraxyn can be purchased through their Official Site.

Vitraxyn Readers: Noom is offering our readers a free trial, for a limited time. Click here for this special offer!
Overview

Vitraxyn is a testosterone-boosting supplement designed for men who want to improve their sex life. This dual-action formula promises to treat the root cause of your issues with sexual function.

There is little information available about the company that makes Vitraxyn. The Better Business Bureau lists an Ontario, Canada P.O. box for an address, but the company’s Facebook page claims that they are located in Sulawesi Selatan, Indonesia.

The makers of this product also claim that it was featured on the hit CBS show The Doctors, CNN, CNBC, USA and in Men’s Health Magazine. There is no record of this male enhancement supplement ever having appeared on any tv show or in any magazine.

Our researchers investigated the ingredients in this testosterone-boosting formula to determine whether it is safe and effective.

The ingredients in these male enhancement pills include:

Muira Puama Extract, also known as potency wood, is often used as an aphrodisiac in Brazil. Examine.com researchers found little evidence to suggest that Muira puama has any effect on human sex drive, but it does appear to have neuroprotective abilities in mice.

Saw palmetto supplements are derived from the fruit of the Serenoa repens plant, a dwarf palm tree found in North America. Saw palmetto is touted as benefiting the prostate and improving libido in older men, but the science behind these claims is not strong.

A study published in Drug Safety found several side effects associated with saw palmetto. One of those side effects was decreased libido. It appears that taking male enhancement pills that contain saw palmetto could have a negative impact on your sex life.

L-arginine is a protein-building amino acid found in red meat, poultry, soy, fish, dairy, beans, and whole grains. According to research for the Mayo Clinic, L-arginine is a vasodilator. Taking supplements that contain L-arginine might have a positive effect on erectile dysfunction, but we typically get enough of the amino acid through diet. L-arginine deficiencies are rare.

Asian red ginger is an herb commonly used in traditional Chinese medicine. A study published in the Journal of Urology found that men who took 900 milligrams of red ginger, three times a day, saw an improvement in their erectile dysfunction symptoms.

The study was small, but the results look promising. More extensive clinical trials are needed to determine the safety and effectiveness of Asian red ginger.

An article published in the International Journal of Food Sciences and Nutrition found that ginger increases testosterone production in rats.

Bioperine is a patented version of piperine, the compound that gives black pepper its odor. Examine.com researchers found that piperine in most commonly used as a digestion aid. It can increase the absorption rate of other ingredients.

Ginkgo biloba, also known as maidenhair, is sourced from a tree found in China. Several studies, including one published in Phytotherapy Research, suggest that Ginkgo biloba boosts the level of nitric oxide in the blood. This causes blood vessels to dilate and improves circulation. Improving circulation could potentially improve erectile dysfunction symptoms.

Our research team has some concerns that Vitraxyn is a scam. The company currently has an “F” rating from the Better Business Bureau, and there are allegations of fraudulent credit card charges.

The makers of Vitraxyn refused to respond to a warning letter they received from the Better Business Bureau, but they did add a disclaimer to the bottom of their website. It states that the claims made about this product have not been scientifically substantiated.

Male enhancement supplements work for some men but not for others. The National Center for Complementary and Integrative Health warns consumers to avoid products that make claims that sound too good to be true.

Some ingredients in Vitraxyn may have a positive effect on testosterone levels, but the company did not provide any clinical trials to prove if it is safe or effective. One concern we have with this product is the price. The Vitraxyn cost is $93 a month. There are other testosterone-boosting products available for much less.

As with any male enhancement drug, results will vary depending on the user.

Most Vitraxyn reviews we found were negative. Many users said the product doesn’t work, and others claimed they experienced side effects.

Testimonials on the company’s official website claim that this product improves stamina, size, and satisfaction.

Take one capsule once a day.

Based on the ingredients in this testosterone boosting formula, the following side effects are possible:

“Doesn’t work. they automatically resend and Bill without any notice or choice.”

“It’s a scam they steal your money before trial period up and their customer service number is a sham they act like they can’t find your purchase then tell you never heard of this product and the product does absolutely NOTHING.”

Our researchers have some concerns regarding Vitraxyn. There seemed to be some confusion over where the company is located, and it’s nearly impossible to contact a customer service representative. However, we did like the fact that some of the ingredients were backed by science.

Losing weight is a goal that can be difficult to achieve in many cases – both men and women. We believe there’s a program to help.

Among the best weight-loss programs we’ve come across in years is one called Noom. With Noom there’s a virtual community by your side to listen and offer advice, a customized meal plan so you know you’re eating what you lose – this is combined with a non-restrictive diet.

The makers of Noom know that their product is effective, and they are offering a free trial to prove it. 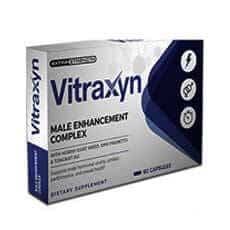 clear
Q:
Is Vitraxyn for weight loss or testosterone boosting?
A:

Vitraxyn is a supplement used to boost male testosterone and improve sexual function.

Q:
What are the Vitraxyn ingredients?
A:

Vitraxyn has the following ingredients:

Q:
Are there Vitraxyn side effects to know about?
A:

Vitraxyn has a long list of possible side effects. These include:

Q:
Is Vitraxyn for men or women?
A:

Vitraxyn is meant to be taken by men.

Q:
Where can I buy Vitraxyn?
A:

There is little known about the company that makes and sell Vitraxyn. The BBB opened an investigation against them in 2019.

Q:
Where can I buy Vitraxyn?
A:

Vitraxyn can be purchased using their Official Site.

Q:
Is there a Vitraxyn free trial or free samples?
A:

There are no free samples or free trials of Vitraxyn.

Q:
What is the most common Vitraxyn complaint?
A:

The biggest complaints against Vitraxyn are the following: