I paused before I hit the “publish” button on this one, because my conclusion was a bit of a shocker. We took a close look at Xenical, examining the side effects, ingredients, level of customer service and scientific studies. Plus we sorted through dozens of user remarks and comments from all over the internet. At this point, we summarized and compressed all of the data we collected to give you the facts and details you need.

Xenical can be purchased through their Official Site.

Xenical Readers: Noom is offering our readers a risk-free trial, for a limited time. Click here for more information!
Overview

Firstly, Xenical ingredients include orlistat (120 milligrams). It is a prescription-grade weight-loss pill that can be used by individuals 18 and older. It is supposed to help block some of the fat in your diet from being absorbed by the body. This way, you do not experience as much weight gain from the foods you eat. This drug is combined with a reduced-calorie diet and goes by your doctor’s instructions. The cost varies depending on your insurance coverage.

Xenical first got approval by the FDA as a prescription drug for treating obesity in 1999. It’s also available in an over-the-counter version called Alli. Regular exercise is typically encouraged with this diet medication. Furthermore, there are plenty of helpful user reviews and comments posted on the web, but this is what some of the research says:

The first concern we found was more than a few users reporting some adverse reactions. According to our Research Editor, “Xenical side effects may include fatty or oily stools, nausea, gas, stomach pain, oily discharge, rectal pain, increased number of bowel movements, loose stool, and oily spotting in undergarments.”

One user reported, “I have been taking this for two whole weeks and haven’t lost any weight. Although I have all of the side effects.”

However, a different person stated, “Started this three days ago. Had already begun a low-fat diet a few days prior. I’ve had none of the oil-related side effects.”

Another commented, “I think it’s working well for me. I’m not being bothered by oily stools anymore since I’ve been eating less fat and more fiber.”

We noticed that several people have complained of minimal to no real weight-loss results from Xenical. For example, one user posted, “Took it for one and a half months. Didn’t lose even one pound. It didn’t work for me, obviously. I have to say that yes, you excrete fat when you eat fatty things, and on days where you watch your food choices, it keeps you clean. But either way, no results for me.”

On the other hand, some people experienced real effects. One person commented, “Been on Xenical for two weeks so far. Seeing some results.”

“It’s been a few days. Not sure at this point. I do have oily stool issues,” revealed another.

The extensive research we’ve done has revealed a particular aspect of a diet pill or program that’s quite concerning or complicated, such as no results, the probability of long-term success is relatively low. Therefore, if Xenical doesn’t work as claimed, that’s a problem.

At DietSpotlight, we prefer to see some actual science that backs up the diet product we’re investigating. As for Xenical, there have been clinical studies conducted to determine if this drug is effective for weight management, and it has shown promise. Therefore this product may produce some real results. On the other hand, not all users see the effects they’re looking for.

“I’ve been taking Alli for 2 weeks with a low fat diet and the results have been dramatic in such a short time. I would recommend anyone trying to lose wait to try Alli. So glad I did.”

“I used to take prescription Xenical (by Roche), which contains the active ingredient Orlistat. That was a reliable medication, causing “treatment effects” after a high-fat meal. I switched to Alli (by GSK), supposedly with the same active ingredient, as it was easier to buy an OTC product. The results are disappointing. Sometimes the “treatment effects” will be noticeable, other times not. A couple of times I’ve conducted controlled experiments when I have purposely eaten a high-fat meal along with taking two Alli capsules (equivalent to one Roche Xenical capsule). Neither time were there any “treatment effects,” which would have been severe with the original Roche product.”

“I would say this product works if you follow a pretty strict diet. If you are looking for something that will help you lose weight without dieting, I don’t feel this works at all.”

The Bottom Line – Does Xenical Work?

Now the moment you’ve been waiting for – our bottom line on Xenical. First of all, we like that the FDA regulates this diet drug. It’s also good to see that some actual research backs this formula. But we have some reservations about this weight-loss pill because several users have complained of no real results. Also, we’re concerned about the unpleasant side effects some people experience.

If you’d like to drop more pounds of fat, then we encourage you to go with a program that is backed by multiple clinical studies and tons of customer reviews touting its efficiency.

One of the best weight-loss programs we’ve seen this year is one called Noom. Noom offers its users everything they need to start losing weight, like human coaching, interactive support groups, and customized meal plans. Moreover, we can’t find any negative user reviews, and multiple clinical studies published in Scientific Reports and BMJ Journals found the program to be extremely effective.

The makers of Noom are so sure about their program they’re offering a free trial offer, which is a positive sign. 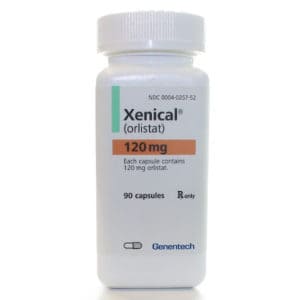 Xenical is used to block some of the fat in the food you eat so that it doesn’t get absorbed into your digestive system and stored by your body. You use Xenical in combination with a lower-calorie diet and other actions for weight maintenance that are recommended for people with diabetes, high blood pressure, high cholesterol, high triglycerides, and certain other risk factors.

Q:
How does Xenical work in the body?
A:

Xenical blocks a certain enzyme that breaks down the fat in the food you eat. Instead of being digested, the fat passes into your colon and leaves your body when you have a bowel movement. It does not block sugar or nutrients other than fat, though, so you still need to monitor your intake of non-fat calories.

Q:
Is Xenical an over the counter drug?
A:

Yes. The U.S. Food and Drug Administration (FDA) has approved the main ingredient in Xenical, orlistat, for use in the over-the-counter dietary supplement Xenical. You can purchase Xenical without a prescription.

Q:
How do you take Xenical?
A:

Take Xenical three times a day, one capsule with each of your main meals for the day. You can take it either during the meal or up to one hour afterward. Fat should account for no more than 30 percent of the total calories in each of your meals. When you skip a meal or eat a fat-free meal, you should skip your dose of Xenical.

Divide your daily intake from carbohydrates, fat, and protein evenly between your three meals. Stay on the exercise, diet, and medication routines you and your health care provider have discussed. Use Xenical within one hour of each meal that contains up to 30 percent fat.

Q:
Where can I buy Xenical?
A:

Xenical can be purchased using their Official Site.

Q:
How much is the Xenical?
A:

Q:
What is the difference between Xenical and Alli?
A:

Q:
What is the active ingredient in Xenical?
A: