5-HTP isn’t your grandfather’s supplement. This one sparked our attention, so we turned our attention toward side effects, ingredients and clinical research. Customers tell us a lot, so we analyzed hundreds of comments and reviews. Then, we condensed and refined to give you the info you need.

5-HTP Readers: Noom is offering our readers a risk-free trial, for a limited time. Click here for more information!
Overview

Hydroxytryptophan or 5-HTP is a naturally-occurring chemical in the body.

In the body, it acts as an antecedent and is a metabolic connection between serotonin and melatonin in tryptophan, according to The Journal of Nutrition.

How Did 5-HTP Start?

Nobel Prize winner Fredrick Hopkin discovered tryptophan at the beginning of the 20th century, per the Journal of Amino Acids. It is an amino acid used for building protein in our body.

Since 5-HTP is a hydroxylated version of Tryptophan, both are used in the production of Serotonin.

5-HTP is the main ingredient of the Griffonia Simplicfolia plant that was initially used as a native medicine for several years, according to Molecules. This plant was originally found in Central and Western Africa when there was no such evidence regarding its medicinal properties.

At that time, it was used as an antiseptic having anti-inflammatory properties. It was given to humans to treat pain, burns, vomiting, diarrhea, tooth decay, and kidney ailments. 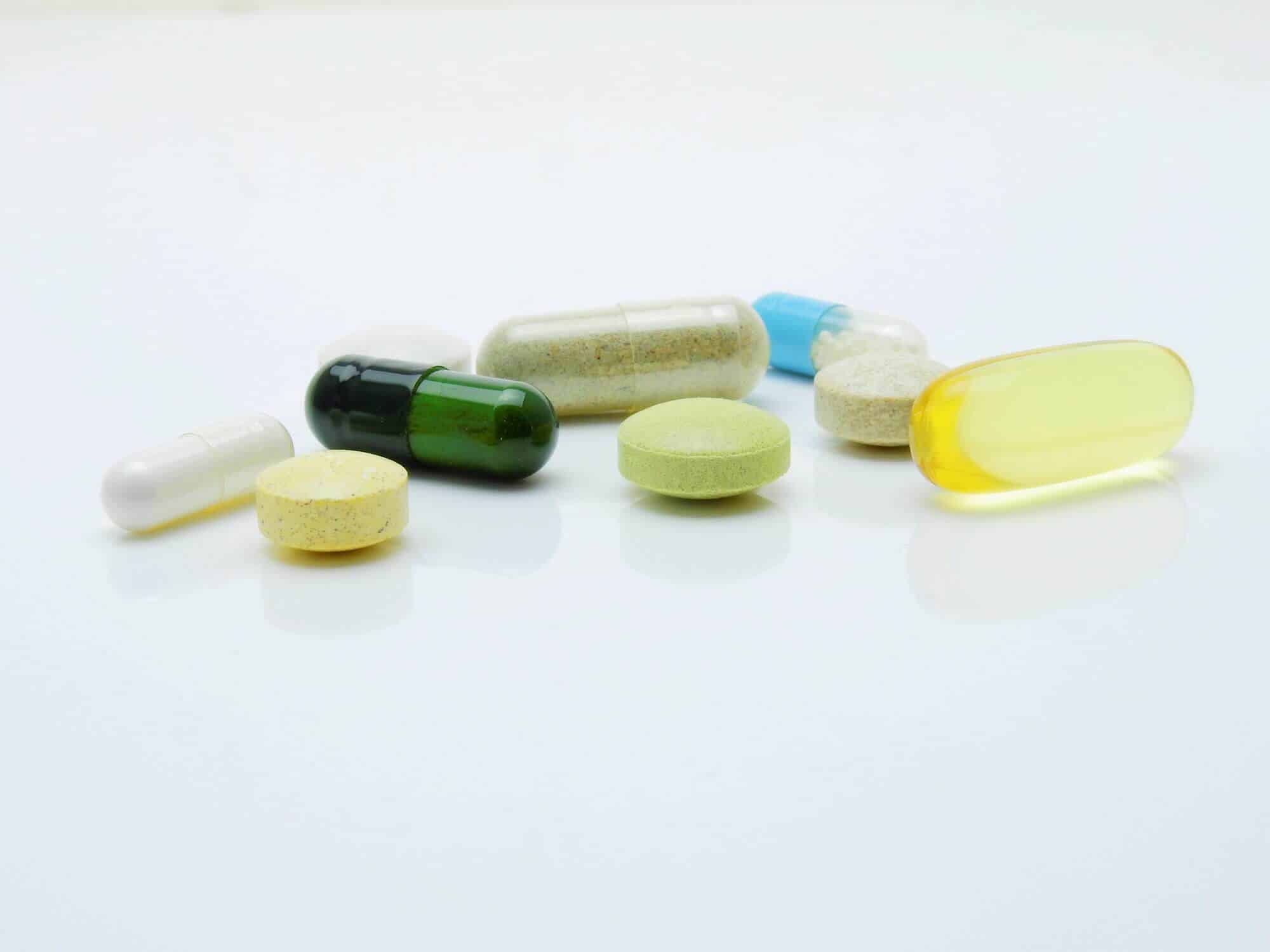 The amino acids in the 5-HTP supplement and L-tryptophan are essential for the healthy functioning of the brain. Although 5-HTP supplements are not available in many countries due to safety precautions, according to Toxicology Letters.

5-HTP reviews suggest that it is useful to aids in sleeping.

Despite there being many misconceptions and controversies concerning the effectiveness of 5 HTP supplements, there is no doubt that 5-HTP speeds up serotonin production.

5-HTP is found in very small quantities in food. It is a chemical found in the metabolism of tryptophan.

Naturally-occurring 5-HTP is found in milk, meat, nuts, eggs, and green vegetables, according to Nutrients.  The seeds of the climbing shrub Griffonia Simplicifolia found in Africa are a rich source of 5-HTP.

It is difficult to tell whether the 5-HTP supplements work as claimed. But the 5-HTP psychoactive action results from the increase in serotonin production in the central nervous system.

5-HTP is an amino acid found in proteins along with being a chemically changed type of tryptophan. It works to generate neurotransmitters in your body, helping your nerves for cellular communication, according to NDT.

Many chemicals and processes in the body are affected by 5-HTP, even the hormone cortisol.

Do you think you stand to benefit from the 5 HTP Supplementations?

Due to insufficient research and lack of scientific evidence, one cannot be sure that 5-HTP supplements will effectively treat the above conditions, according to the U.S. Library of Medicine.

Details on 5-HTP and Weight Loss

Do you think the 5 HTP weight loss is effective?

Clinical studies have shown that 5-HTP supplements give positive results in obese people. It reduces cravings for carbohydrates for those who are on low-carbohydrate diets like the Atkins diet.

5-HTP found in Griffonia simplicifolia extract helps in weight loss, as it suppresses appetite and increases satiety in obese women, per a study published in Gastroenterology Research and Practice.

There is no definite proof to support the theory that 5 HTP supplements can help in weight loss.

The serotonin precursor 5-HTP is marketed as a nutritional supplement, but it is best if taken after consulting a doctor or a medical practitioner.

The effectiveness of 5-HTP is still being investigated. 5-HTP side effects are many and varied if it is taken in high doses. 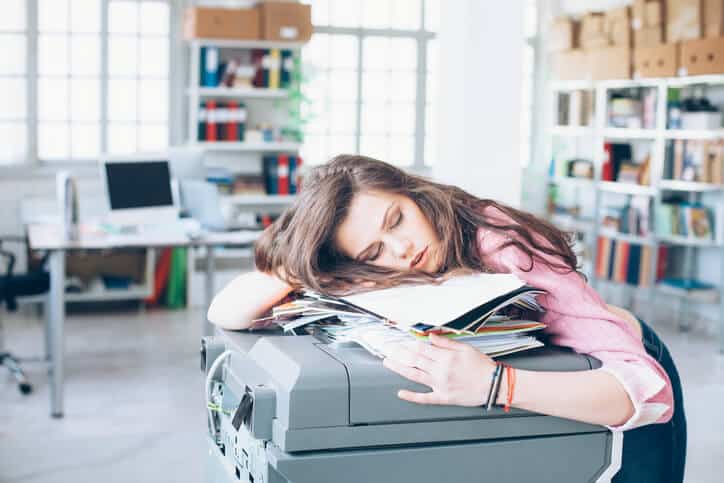 5-HTP supplementation increases the level of a chemical called serotonin in the brain.

Effective doses to be given along with side effects of 5-HTP vary greatly from person to person. It is always advisable to start with a low dose, gradually increasing it over time and as required.

For long-term safety, try a normal dose of 300mg daily and see the results.  It’s always better to consult a doctor before you start with 5 HTP supplements, as it is a little risky trying it on your own.

5 HTP research conducted is not thorough; its effects and interactions if taken with other drugs is not known.

Due to a lack of 5-HTP reviews, you cannot be sure that the product can treat any medical conditions.

It is recommended to follow all 5-HTP warnings and read the directions on the label of the product before using it.

Pregnant and lactating mothers should avoid using it.

5-HTP is not recommended for children unless, in extreme cases under the supervision of a doctor.

What works for some might not work for all. The only difference is how you handle the situation. There are several cases of patients using the 5- HTP supplements, even in the absence of any scientific research.

5-HTP is sold in the US, UK, and Canada directly over the counter as a dietary supplement. It is not under the jurisdiction of any illicit control laws.

However, in Europe, there is some control over its distribution and sale.

5-HTP or Oxitriptan is a supplement that boosts serotonin.

But there are several other alternatives to 5-HTP, including:

Excess 5-HTP in your body can result in a sudden increase in the serotonin level, which in turn will lead to shivering or even serious problems.

It has been observed that people who have been taking 5-HTP for a long period are detected with a serious condition. This could result in tenderness in the muscles and abnormalities in the blood.

Discontinue the use of 5-HTP supplements and immediately contact a medical doctor if you notice other effects like digestive problems, drowsiness, and muscular problems.

5-HTP produces serotonin as well as melatonin. Both can activate sleep-inducing hormones.

For depressed mood, stress, and difficulty sleeping, it is recommended to take a 50 mg or 100 mg tablet of 5-HTP about half an hour before going to bed. The effect will be seen within twenty to thirty minutes.

On the other hand, higher doses will be required for reducing migraines or for losing weight. It has been observed that a 5-HTP dosage of 500 mg a day is usually prescribed. 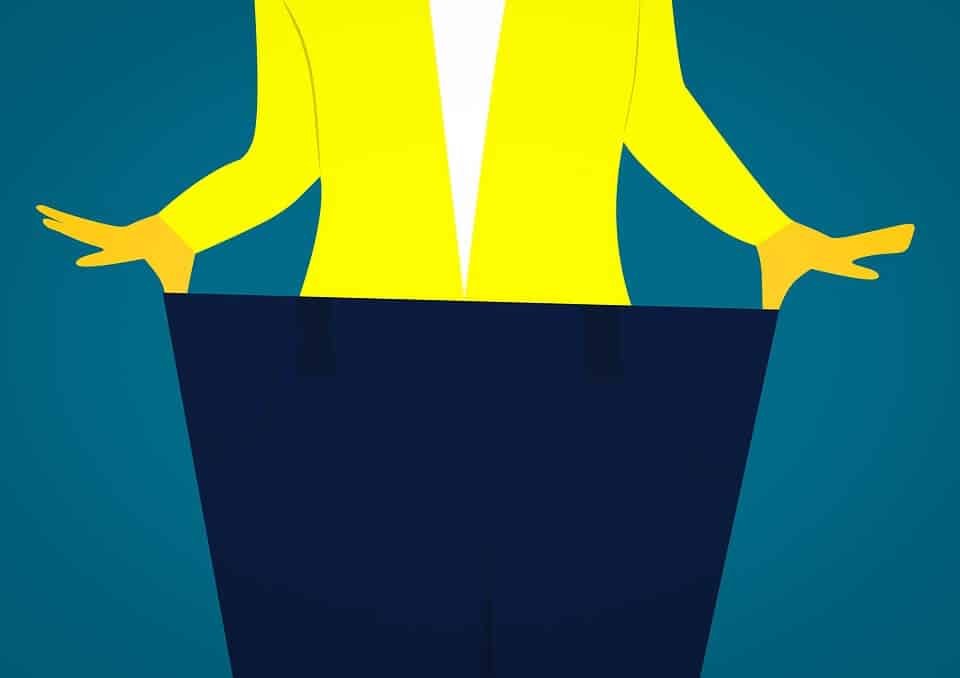 It is advised to take 5-HTP in combination with Vitamin B6, as it works better in the production of serotonin.

But again, it is best to consult a doctor who can prescribe the right dose for your specific symptoms.

When Should You Take 5-HTP?

If you are just starting to supplement with 5-HTP, Dr. Bowen prescribes 50mg to be taken thrice daily for fifteen days.

Lower doses, when paired with other substances, will prove more effective.

5-HTP should be consumed at mealtimes, as it will help to reduce food intake while increasing satiety from food.

It is recommended not to take 5-HTP with neurological drugs unless prescribed otherwise by a medical doctor.

Interactions of 5-HTP with Other Medicines

If high doses of 5-HTP supplements are administered to rats in combination with antidepressants like SSRI or MAOI type, it can result in acute serotonin syndrome, but this has not been proved in humans.

Unless both 5-HTP and MAOI are taken in large quantities, the risk of developing serotonin syndrome is quite low. 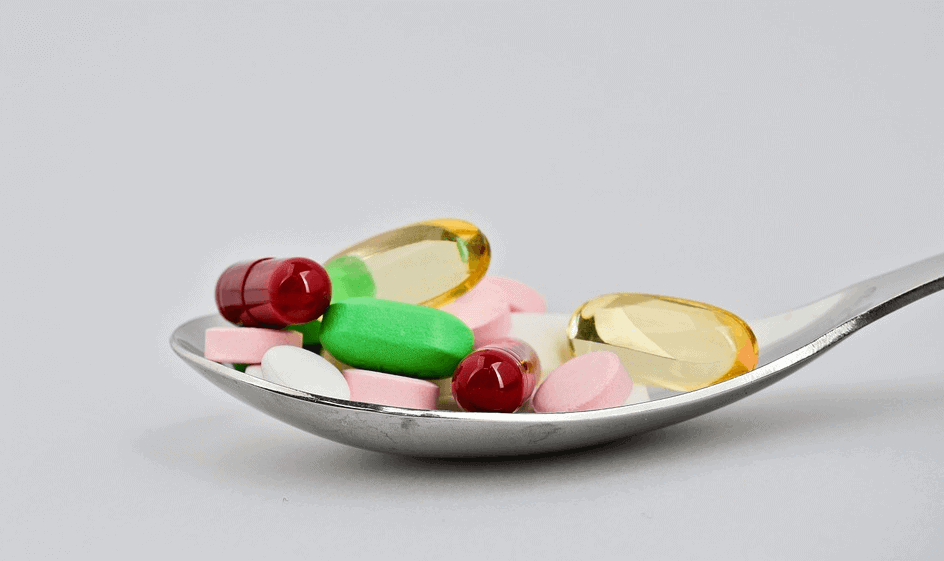 If Carbidopa is combined with 5-HTP, symptoms of nausea and vomiting are observed.

If 5 HTP dosage is taken orally, there is an increase in the urinary 5-HIAA, indicating a metabolized serotonin.

As 5-HTP is a naturally-occurring process in the body, it is supposed to be safe if used on a short-term basis for about three months.

But people with gastrointestinal problems should take it only after consulting a doctor due to various side effects like nausea and vomiting.

It has also been observed that all such symptoms subside considerably within a few weeks.

It is not safe for children, pregnant women, and breastfeeding mothers.

5-HTP is decarboxylated to serotonin with enzyme aromatic L amino acid and Vitamin B6. As this reaction is seen both in the liver as well as in the nervous tissues, the blood barrier is crossed by 5-HTP.

The role of 5-HTP in menopause has been under investigation, and the results show a decrease in hot flashes and other menopausal symptoms due to Selective Serotonin Reuptake Inhibitors (SSRIs).

A study was conducted on women undergoing menopause who were given 150mg of 5-HTP daily in three doses of 50 mg each. After a week, there was no reduction in the occurrence of hot flashes in menopausal women, according to Maturitas.

“I can sleep again! – It’s been about a week now, and while I did buy this to help with my appetite, which I haven’t noticed much of a difference with, the sleep I’ve been getting has been heaven sent. I’m a person that tosses and turns and over caffeinates at my job, and also has some chronic pains that can keep me from sleeping through the night- but for this solid week, I have slept fully every night. No weird nightmares to boot either, just wonderful, full rest if I take one about an hour before bed. I’ll futz with the morning dosage to see if it helps more with my appetite too since it seems to just make me sleepy lol.”

“This product immediately gave me significant stomach aches. Was not able to get full refund from company. I do not recommend.”

“Did not have any effect on me at all.” 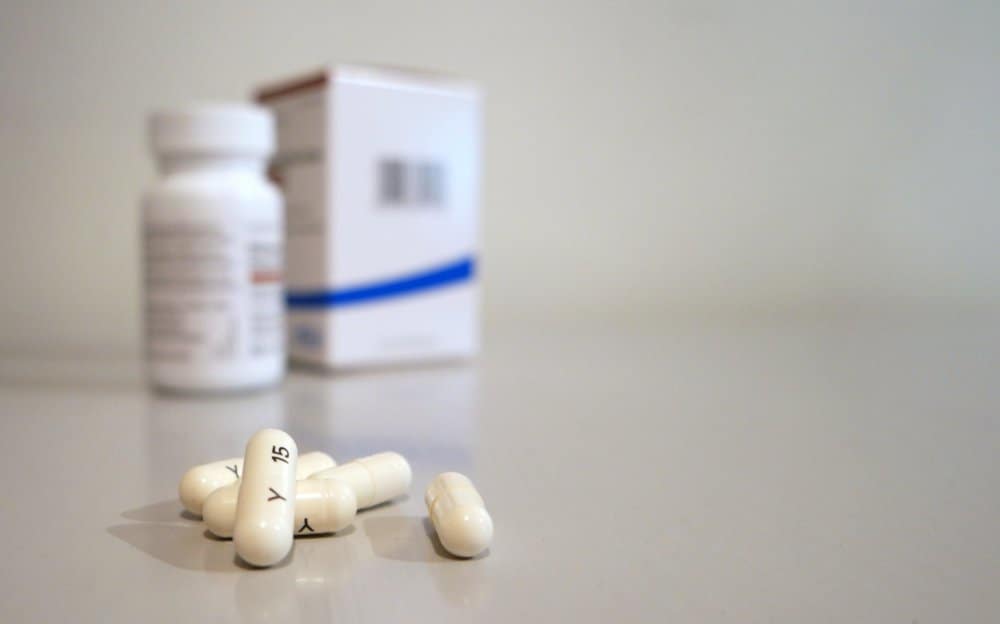 The Bottom Line on 5-HTP

Are you still thinking about heading out for 5-HTP? Well, we like that it’s available at multiple locations and that it seems affordable, but when the research doesn’t exactly support the weight-loss claims, we start to have reservations about suggesting it. Also, when customers start to talk about negative side effects and it not producing results, we become concerned.

A successful weight-loss journey starts with the right clinically-tested program backing you up.

Also, the company that makes Noom is giving a free trial offer to all Dietspoltight readers for a limited time. 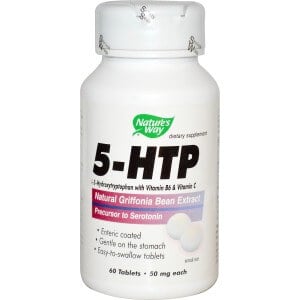 5-HTP is an unregulated supplement with few guidelines in place concerning dosage amounts. Follow the label on the bottle, as well as recommended dosage of 150 mg to 300 mg per day.

5-HTP is a dietary supplement made from seeds of a plant grown in African. The supplement raises serotonin levels inside the brain. Serotonin helps regulate mood and behavior, thus 5-HTP has positive effects on an individual’s mood, sleep habits, appetite, and sensations to pain.

5-HTP is derived from an African plant called Griffonia simplicifolia. It is the nutrient precursor to serotonin.

The Griffonia simplicifolia plant produce 5-HTP in the seeds. This climbing shrub is native to Central and West Africa, where it is used as a 5-hydroxytryptophan herbal supplement replacement.