Keto Blast is here to blow you into ketosis, right? Let’s face it; keto diets are hard to follow. Counting every single carbohydrate you eat is time-consuming, and there’s no guarantee you will lose weight. The makers claim to have a solution. It is an exogenous ketone supplement designed to help you meet your keto diet goals.

Our research team was intrigued. Is Keto Blast safe and effective? Does a keto diet even work in the first place? To find answers, we looked at the ingredients, investigated the company that makes the supplement, and considered what previous customers had to say. We uncovered some things that might make you reconsider the weight loss supplement you’re using.

What is Keto Blast?

Keto Blast is an exogenous ketone supplement formulated to improve the likelihood of forcing the body into ketosis more quickly. This group of ketones comprises three water-soluble elements, including BHB, which is the most common exogenous supplement on the market today.

How Did Keto Blast Start?

A Delaware-based company called Nutra4Health manufactures Keto Blast. There is no information about Nutra4Health available other than an address in a residential neighborhood and a disconnected phone number. The Facebook Page has one “like” and one follower.

Despite the lack of information available about Nutra4Health, they produce a wide variety of weight loss supplements.

The makers of Keto Blast claim this product will:

Why would a company make false claims about their products appearing on television? Unfortunately, it’s not an uncommon diet pill scam. The Better Business Bureau is currently investigating several weight loss supplement manufacturers for misrepresentation and fraud.

Keto Blast has one ingredient:

According to the Journal of Nutrition and Metabolism, beta-hydroxybutyrate, also known as BHB, is a beta hydroxy acid. When the human body is burning fat for fuel instead of carbohydrates, BHB is produced. Ketosis happens when the body uses ketones like BHB for energy. People who follow a keto diet believe BHB ketone supplementation keeps them in a ketogenic state longer.

For Keto Blast to work, BHB ketone supplementation has to be effective. So, what does the science say about a ketogenic diet? The information available on ketogenic diets is limited.

One study, published in the Journal of Experimental and Clinical Cardiology, suggests a ketogenic lifestyle can result in long-term weight loss.

Our research team also wanted to know if a ketosis supplement has any effect on the keto diet. One study published in the Journal of Obesity (Silver Spring) found that BHB might reduce humans’ hunger. There was no control group in the study, and only immediate observations were recorded. It’s nearly impossible for researchers to study the effects of a keto diet in the long term because it is challenging to maintain a ketosis state for an extended period.

Even if we had found evidence that a ketosis supplement works, it’s important to remember that we have no idea if the weight loss system works.

The makers of Keto Blast keto diet pills don’t provide any evidence to support their claims. Our research team had to look at reviews from verified Keto Blast users to determine if there were any benefits to speak of.

We looked at the official Keto Blast Facebook page. There were 15 reviews in total, and they were all negative. One review called the company a “complete scam.” Another claims Nutra4Health sold their address and phone number to third-party telemarketers. One review even accuses the makers of the Keto Blast diet of fraudulent credit card charges.

It’s worth mentioning that Nutra4Health has used fake reviews with other products in the past.

How to Use Keto Blast

The directions on how to use Keto Blast recommend taking two capsules once a day. It’s best to take the supplement once a day as part of the diet.

According to Nutrients, you’ll need to follow a high-fat diet with a moderate amount of protein to be successful on a keto diet.

Where Can You Buy Keto Blast?

If you are wondering where to buy Keto Blast, you can find it on Amazon. The Keto Blast price is $21.95 for a thirty-day supply of vegetarian capsules.

There aren’t many side effects reported by BHB products, but a ketogenic diet can have adverse effects.

According to StatPearls, a low-carb diet can cause:

Pros and Cons of Keto Blast

Here are the basic pros and cons of Keto Blast.

“I havn’t seen any major weight loss benefit from Keto blast yet. It’s been 3 weeks and I constantly stay moving all time and sweat all the time and as of now I’m disappointed cause it’s a lot of money for no results.”

“They could stop charging people $89 for pills they thought they were getting for shipping only $6.96. There was nothing I could see on the website when I ordered that referred to a trial and $89. I would not have ordered. Called the company and they also offered a partial refund. Would not give me the website I ordered from. What a scam. Never again. You, Keto Blast, are a blight. A giant black spot on the internet.”

Is Keto Blast effective? This BHB supplement will be as effective as the other hundreds on the market. There’s no way to speed up getting into ketosis with a supplement. The body must burn through all carbohydrate stores before the fat is used for energy, and until that conversion occurs, ketosis doesn’t occur. That means this supplement is nothing special.

If you want to lose weight, it is important to choose a clinically-proven program that can help you make the difficult lifestyle choices necessary for weight management.

Noom is one of the best weight-loss programs we have ever seen. With personalized meal plans, human coaching, and extensive food tracking all in an easy-to-use app, Noom gives their users the chance to make healthier choices and lose weight without restrictive dieting.

For a limited time, Noom is giving Dietspotlight readers a free trial offer of their program, so make sure to check it out! 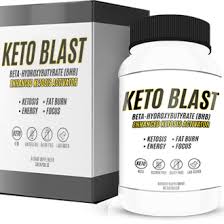 clear
Q:
Is Keto Blast for weight loss?
A:

Q:
What are the Keto Blast ingredients?
A:

Q:
What are the side effects of Keto Blast?
A:

There isn’t any conclusive evidence on whether Keto Blast is safe to consume.

Q:
Is there a Keto Blast free trial or free samples?
A:

We were unable to find a free trial or sample offer for Keto Blast.

Q:
What is the most common Keto Blast complaint?
A:

The most common complaint about Keto Blast seems to be that it is ineffective.

Q:
How does Keto Blast work?
A:

According to the supplement’s claims, Keto Blast is supposed to help user’s body reach ketosis, burn fat in the body, and therefore lose weight.