Thermovex is a professional-strength metabolic formula produced by EvoChem Nutrition. The company claims that Thermovex will increase energy levels, promote thermogenesis, and boost your metabolic rate. The formula contains an extensive blend of vitamins, minerals, and extracts – so many that it might be challenging to discern which ingredients are effective and which are not. Green tea extract and l-carnitine are both known to be effective for fat loss, but which is the more-effective ingredient in this formula?

We took a more in-depth look into the Thermovex ingredient list and the science behind these ingredients to give you the Bottom Line on the product. Read on to learn what we found.

Thermovex can be purchased through their Official Site.

Thermovex Readers: Noom is offering our readers a risk-free trial, for a limited time. Click here for more information!
Overview

Thermovex is a sugar-free metabolic formula that contains around 10g of fiber per serving. It is a popular supplement among athletes, bodybuilders, and those who lead an active lifestyle due to its numerous benefits, including burning fat. It is unofficially referred to as the ‘Thermovex fat burner.’

This process is done by increasing heat through Thermogenesis, which aids in heightening energy levels.

The Thermovex metabolic formula has gained popularity because it increases the user’s digestion rate and encourages frequent activity, but what do some of the studies on this supplement’s ingredients say? 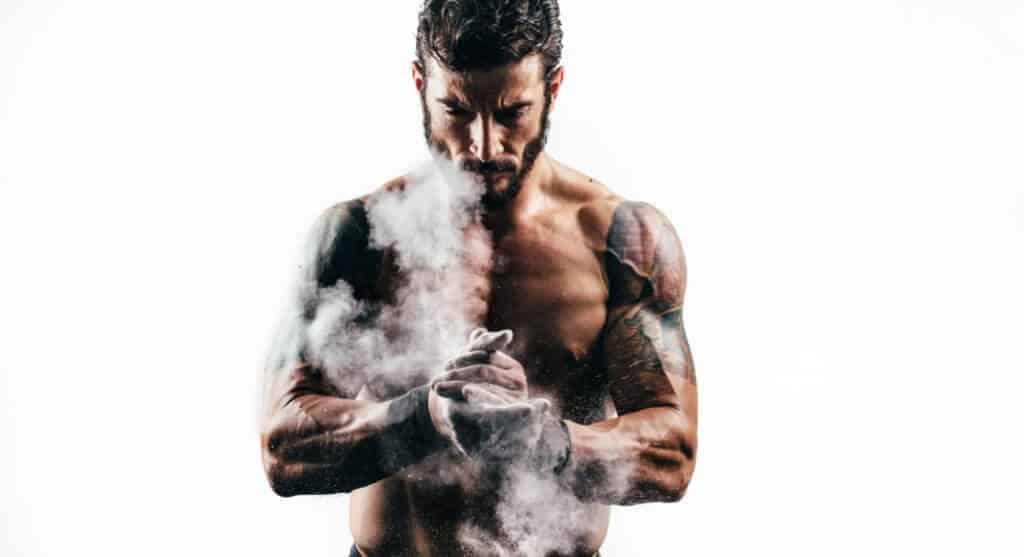 Thermovex is manufactured by EVOchem Nutrition who aims to only provide high-quality products will well-studied ingredients.

The components in this supplement have been scientifically proven to aid in the loss of fat. There is no secret in the ingredients used in Thermovex, and the company remains as transparent as possible.

Like most companies, EVOchem prides itself on having the most efficient supplement for pre-workout and burning fat. The supplement is more efficient when consumed before an intense workout, while some consumers warn against it.

The company claims that taking the product before will allow the body to actively burn fat while causing a distraction.

It sounds like experiences vary per customer and activity.

L-carnitine is a carrier molecule that plays a role in brain, heart, and muscle function. L-tartrate is an antioxidant. According to a study published in the Journal of Strength and Conditioning, L-carnitine L-tartrate supplementation could potentially foster faster recovery from exercise.

Choline is used to produce certain neurotransmitters that play a role in memory and muscle function. Choline is present in a wide variety of foods, and choline deficiency in humans is rare.

Caffeine stimulates the central nervous system. Caffeine is the world’s most widely used psychoactive drug. Caffeine is typically safe in low doses, and there is evidence to suggest that it has thermogenic properties.

Dimethylethanolamine is an organic compound used in skincare products.

Green tea extract contains caffeine and catechins that are beneficial to weight loss. A study published in Current Topics in Medicinal Chemistry found that green tea can prevent oxidative stress by reducing the damage caused by free radicals.

Dandelion is an herb used in alternative medicine to treat several conditions. Unfortunately, there is no evidence to support the safety and effectiveness of dandelion extract.

Opuntia ficus-indica is a type of cactus better known as the prickly pear cactus. A study published in the Journal of Functional Foods found that the prickly pear increases antioxidant activity in blood and plasma.

Guarana, also known as Brazilian Cocoa, is a plant found in the Amazon rainforest. Guarana is marketed as a way to improve mental clarity, increase athletic performance, and promote weight loss.

How Much Caffeine Is In Thermovex?

Thermovex has about 345mg of caffeine per serving, which can be too much for some users.

The product’s caffeine count comes with its side effects, including a possible increased heart rate. These effects are the expected results of drinking coffee.

A lifestyle product, Thermovex comes with quite a few claimed benefits, including:

It is of high-quality and intensely effective when it comes to thermogenesis. There is a good chance that it will enhance energy and burn calories faster.

However, while their ingredients have been scientifically proven to benefit the body separately, there is no concrete data that the supplement itself works as it says.

The “professional strength sugar-free metabolic formula” has an abundance of beneficial ingredients that have put it on the map as a successful supplement. There are no clinical studies available as evidence, but EVOchem has claimed to have chemically studied the constituents to develop the best product.

Another main component of Thermovex is thermogenesis. It is the process of increasing the heat so that fat cells burn, leading to the release of excess energy, which can then be used for stamina in physical activity. Thermovex accelerates this process.

The fiber in Thermovex attaches to toxins that create lethargy and flush them out of the system. This means that you won’t feel like eating unnecessary food.

Thermovex also results in a decrease in water retention. This happens because of the presence of natural diuretics, which aid in removing extra water in the cells. These cells otherwise make the fat cells appear more bloated.

The ingredient L-Carnitine-L-Tartrate (LCLT) is helpful in minimizing the size of the fat cells per the Journal of Strength and Conditioning Research.

Even though there is minimal research on this fact, it has been claimed that raspberry ketone and hoodia, found in Thermovex, support weight loss as well.

Ingredients like dandelion and uva ursi increase urination, which helps remove toxins from the body resulting in a healthier being.

Thermovex comes in powder form and can be mixed with water or protein shakes. This mixture can be consumed throughout the day and provide energy whenever required.

It is essential to follow the instructions mentioned on the supplement bottle, especially how much needs to be consumed. Too much of any product can be harmful. 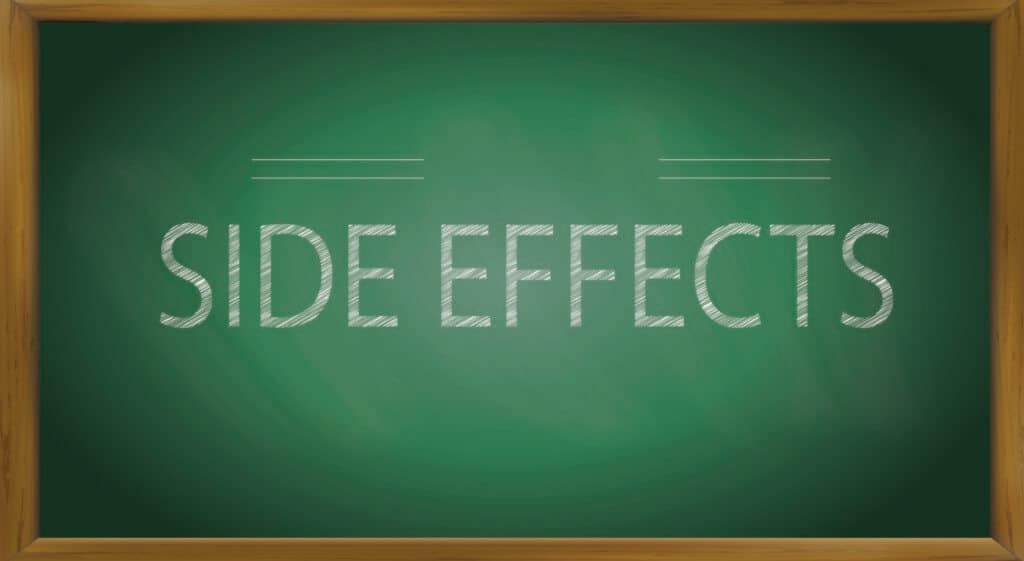 The good news is that Thermovex is generally a harmless formula, as it includes mainly natural side effects. As with any supplement, there are potential side effects such as:

Consumers who are allergic to dairy, eggs, shellfish, tree nuts, soy, peanuts, and wheat are advised not to use this product.

Thermovex is available in four flavors, including:

Thermovex is only sold both through EVOchem’s brick and mortar locations in limited states across the country and online.

The typical price range for Thermovex is between $60 and $70, and the store typically runs a promotion for a discount. On the official website, the price is $59.95.

Because fat burning pre-workout products are highly popular right now, there are many similar alternatives to Thermovex. These include:

Slim Quick helps to reduce three times the weight loss but has only had great success in women users. It works similar to Thermovex by increasing metabolism and suppressing the appetite.

It works similarly to the other supplements by providing energy, burning fat cells, and providing enhancement levels to moods.

A sugar-free supplement, Thermovex PM, is known as the fat-burning sleep aid. It is made up of two blends:

It is made of GABA and L-theanine, which assists with anxiety so that peaceful sleep can be achieved, and velvet beans, which have therapeutic effects. Consumers have reported quality sleep after consuming this.

This product is available is green apple and watermelon.

“I take Supplements, and this is one of my favorites. I’m on my 4th tub of it now. I’m extremely stim tolerant, like I could drink a Monster an hour before bed and still sleep like a baby. So I was surprised when I found something that I could actually feel the effects of. It’s made by EvoChem which is Nutrishop house brand, so you won’t find it for sale anywhere but Nutrishop, it’s for suppressing appetite, burning fat, boosting energy, mood & focus.”

“I’m skeptical. My guess is that Thermovex has a crap ton of caffeine.”

“I use to take thermovex I love it! But now that I’m in the keto diet I have decided to try the ketovex today is only my second day using it I’m hoping it helps only thing it doesn’t have any caffeine in it but it is suppose to give you energy.”

The Bottom Line on Thermovex

Will Thermovex amplify your energy and calorie burning? Based on the ingredients, including multiple stimulants, there’s a chance. It’s beneficial to see research backing the ingredients. The only concern relates to some discouraging comments and mention of side effects.

If you’d like to tackle weight loss once and for all, we suggest going with a program that just works – no fluff no hype just results.

Among the best programs we’ve encountered yet is Noom. With human coaching, this app isn’t like others on the market. Also, you get expert support and an extensive food database for accurate food tracking.

Dietspotlight readers can access a free trial offer of Noom for a limited time. 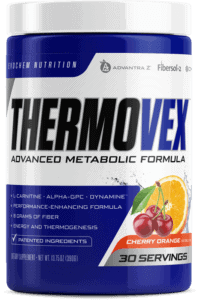 Impressive that it contains energy boosting ingredients, plus fiber.

clear
Q:
What are the side effects of Thermovex?
A:

You may experience sweating, nausea, itching or restlessness following the use of Thermovex.

Q:
Does Thermovex work?
A:

Q:
What is the price of Thermovex?
A:

Q:
How should I take Thermovex?
A:

Mix Thermovex with water or protein shakes and consume.

Q:
How do I contact Thermovex customer service?
A:

Q:
Where can I buy Thermovex?
A:

Thermovex can be purchased using their Official Site.

Q:
Can I return Thermovex?
A:

No, there is no money-back guarantee offered by the manufacturer of this product.

Q:
What are the most common complaints about Thermovex?
A:

The missing information regarding money-back guarantee is the most common complaint about Thermovex.

Load More
No votes yet.
Please wait...
Thermovex or Noom?
Click Here to Find Out