Bubblr – an antioxidant water that’s supposed to bring you natural energy without the crash that happens with those uber-caffeinated drinks. Will you lose weight? Is it enough caffeine? Is Bubblr healthy and safe? There are tons of questions around this brand.

Our research team dedicated hours to finding out where the product originated, where they are today, what ingredients they use, the science behind those ingredients and so much more. Keep reading for the bottom line on Bubblr antioxidant water.

Bubblr can be purchased through their Official Site.

Bubblr Readers: Noom is offering our readers a risk-free trial, for a limited time. Click here for more information!
Overview

Bubblr is a flavored antioxidant sparkling water with vitamins and caffeine from natural sources. With only five calories per can and no sugar or artificial sweeteners, the energy drinks are a healthy alternative to traditional energy drinks.

Bubblr energy drink flavors are light and refreshing, and they can be used in recipes or enjoyed alone.

The people at Bubblr Energy came up with a few fun recipes that use these energy drinks as ingredients:

Bubblr Energy is a subdivision of Klarbrunn, a Wisconsin-based beverage company. WIS-Pak, an independent distributor and manufacturer of Pepsi-Cola products, owns KlarBrunn. KlarBrunn was founded in 1987 and is dedicated to finding new and innovative ways to enjoy drinking water.

Bubblr does not have a BBB page, but WIS-PAK does. The company is not accredited with the BBB; and although they have an A+ rating, there are no customer reviews and no customer complaints. This is quite odd taking into consideration the popularity and size of the company.

The subdivision was launched in 2017. The energy drinks were originally only available in parts of the Midwest, but in 2020, the company signed a distribution agreement with the PepsiCo Beverages North America Central Division to expand its market into the Southern United States. The antioxidant water is also available on Amazon.

If you need to contact customer service, you can call or email using the form on the official website.

Other Products from the Makers of Bubblr 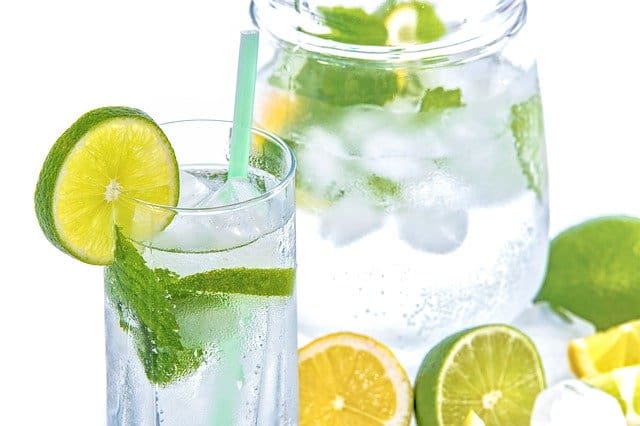 Bubblr claims to be water’s energetic new best friend. The makers promise that each can is packed with vitamin A and B vitamins. The sparkling water is vegan, free from soy and gluten, and has a low glycemic impact.

According to Annual Reviews in Neuroscience, caffeine affects a neurotransmitter known as adenosine to make you feel less fatigued.

Erythritol is a sugar alcohol used as a natural sweetener. It contains less than 6% of the number of calories as traditional table sugar. According to a study reviewed in Regulatory Toxicology and Pharmacology, erythritol is safe for long-term use.

Research from the American Journal of Clinical Nutrition suggests that vitamin A may support your immune system and reduce your risk of developing respiratory illnesses.

According to the Journal of Inherited Metabolic Disease, vitamin B6, or pyridoxine, plays an integral role in creating the hormones that regulate our emotions. Vitamin B6 is also involved in the metabolism of fat, protein, and carbohydrates.

Vitamin B12 is another essential vitamin that helps your body produce red blood cells as per the Mayo Clinic Proceedings.

Bubblr contains a healthy amount of caffeine and several essential vitamins to boost your energy and your mood. If you’re looking for a healthier way to get your daily dose of caffeine, it may work for you.

According to the Journal of Neurochemistry, caffeine may have the ability to increase brain activity and blood adrenaline levels. That’s why millions of people around the world drink coffee when they wake up: Caffeine acts as a stimulant to the central nervous system.

There are two ways that Bubblr can help you lose weight. The first way is with caffeine. A widely cited study from the Journal of Clinical Nutrition found that caffeine may increase your fat-burning potential and give your metabolism a boost.

The second way is by helping you kick your soda habit. Some people love the sugary taste of soda, while others crave a carbonated beverage. Unfortunately, several studies, including one from the American Journal of Clinical Nutrition, link regular soda consumption with obesity. Soda contains calories and sugar, and it has zero nutritional value. Switching to a low-calorie, sugar-free beverage can help you reduce your calorie intake and your risk for developing certain health conditions or concerns.

Is Bubblr antioxidant sparkling water keto-friendly? The water contains eight grams of carbohydrates, but those carbohydrates are considered “non-impact” carbs. Non-impact carbs are carbohydrates that do not affect your blood sugar levels, so they aren’t counted towards your daily carbohydrate allowance.

Bubblr contains a relatively low dose of 69mg of caffeine per can. An average cup of coffee has about 95mg of caffeine. If you’re sensitive to caffeine, you may experience:

It also contains erythritol. In large doses, erythritol is known to cause nausea and stomach rumbling, so drinking several cans may cause an upset stomach as per the European Journal of Clinical Nutrition.

You can drink Bubblr whenever you’re thirsty or need an extra dose of caffeine in your life. It can also be used in food and drink recipes.

You can find Bubblr on Amazon and the official website. On Amazon, prices range from $24 – $29, depending on the type of package you choose.

Unfortunately, Bubblr is only available at gas stations and convenience stores in a handful of states. The company recently partnered with Pepsi-Cola, so they may expand distribution to more states shortly.

“I love these drinks! I love the steady non jittery energy boost from them. Very low calories and zero sugar with a natural caffeine boost. Lots of flavors also!”

“I try to avoid sugary drinks so sparkling water is a go to for me. Bubblr drinks are probably the best sparking water brands I have ever tasted. Goes down smooth! No artificial, bitter taste. Tastes great. Doesn’t skyrocket blood sugar and has vitamins and antioxidants to boot.” 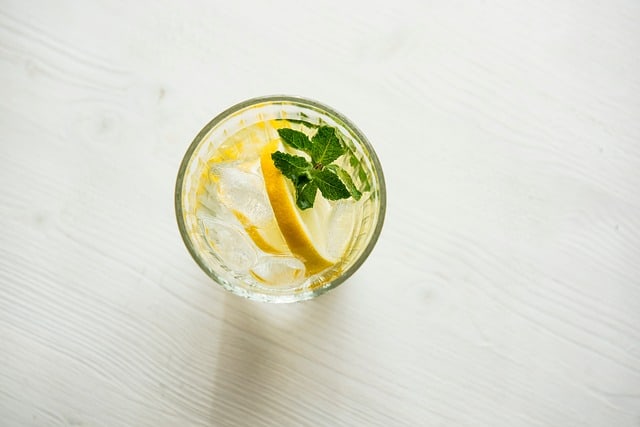 The Bottom Line on Bubblr Results

At the end of all that research, we were pleasantly surprised with the amount of caffeine in Bubblr and the unique flavors. The fact that they suggest using the drink in cooking, is something we’ve not seen in the energy drink market, and we love new things. But, it won’t help you lose weight and if you already drink a cup of coffee or other caffeinated beverage, you may not notice much increased energy.

We want you to lose the weight you want in a way that creates lasting change. You can do that with a clinically-proven program.

Among the best in weight-loss plans we’ve encountered is one called Noom. The program starts at just 16 weeks and during that time you’re partnered with two coaches, a dedicated support group and a ton of #NoomNerds that love to teach you about losing weight once and for all.

Today you can take advantage of a free trial offer from Noom so you can start losing weight for the last time. 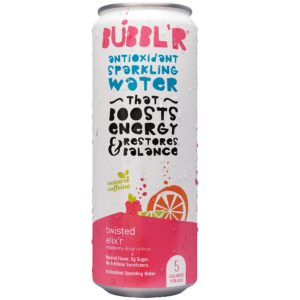 clear
Q:
Is Bubbl'r an energy drink?
A:

Bubbl’r is a flavored, carbonated water with 69mg of added natural caffeine. This categorizes it as an energy drink, though the caffeine content is much lower than other brands on the market like Bang and Monster Energy.

Bubbl’r is a unique twist on sparkling water because it contains antioxidants, natural caffeine, natural flavors, and colors. Say “goodbye” to artificial sweeteners.

Bernick’s, a Wis-Pak partner, is behind the idea that led to Bubbl’r. Wis-Pak manufactures and distributes Pepsi-brand products. There are currently 40 shareholders in Wis-Pak, which runs as a cooperative company. It was originally a Klarbrunn variant, also produced by Wis-Pak.

Q:
How much caffeine is in a can of Bubbl'r?
A:

Bubbl’r contains 69 mg of natural caffeine per 12-ounce can. Breaking that down, each ounce of sparkling water contains 5.75 mg of caffeine.

Q:
Are Bubbl'r drinks bad for you?
A:

Bubbl’r is an antioxidant sparkling water. It contains 450 mcg of vitamin A (50% of the recommended daily intake) and vitamins B3, B5, B6, and B12. The company touts the product as “bubbles with benefits.” However, it also contains 69 mg of caffeine per can. It’s recommended to consume no more than 400 mg of caffeine daily from all sources.

Bubblr can be purchased using their Official Site.

Kids shouldn’t drink Bubbl’r for several reasons. First, carbonated beverages can cause stomach trouble in kids, including upset stomach and gas pains. Second, 450 mcg of vitamin A may be too much for a well-nourished child. Finally, each can supply 69 mg of caffeine, which is far too much for children under 10.

No, Bubbl’r isn’t a Coke product. It is, however, manufactured by Wis-Pak, an independent distributor for PepsiCo.

Bubbl’r is a flavored, carbonated energy drink with antioxidants that is manufactured by Wis-Pak, an independent distributor for PepsiCo.

Q:
What are all the Bubbl'r flavors?
A:

Q:
How do you become a Bubbl'r ambassador?
A:

A Bubbl’r Brand Ambassador drives brand image, reaches new consumers, and increases regional sales. They are reliable, outgoing, and adaptable. In order to qualify for the Bubbl’r Brand Ambassador program, you need to check the following criteria. You must be at least 21 years old, have a valid driver’s license, be comfortable lifting up to 50 lbs, be willing to work indoor and outdoor events in any weather conditions. Previous event marketing, brand ambassador, and customer service experience is preferred but not required.

Q:
What is the new Bubbl'r flavor?
A:

Load More
No votes yet.
Please wait...
Bubblr or Noom?
Click Here to Find Out