Burn XT is a trendy fat burner that makes promises the ingredients may not support. The makers of the Burn XT fat burner supplement claim that it is a thermogenic product that raises the internal temperature and activity within cells, thereby increasing metabolic rate and weight loss.

While some hail it as a cutting-edge thermogenic fat burner, others have questioned whether the product is too good to be true. A look at the significant characteristics of Jacked Factory Burn XT can help you determine whether this product is right for you.

Burn XT can be purchased through their Official Site.

What is Burn XT?

The Burn XT fat burner supplement is a weight loss capsule designed to increase fat metabolism, burn calories, and suppress appetite. The manufacturer also claims that it also acts as an energy booster to increase the stamina needed to build lean muscle during workouts. The formula is a unisex weight loss supplement designed for both men and women.

How Did Burn XT Start?

Burn XT is the flagship thermogenic fat burner from the Jacked Factory brand. Jacked Factory is a trademark of Nutra Holdings Inc., a dietary supplements manufacturer headquartered in New York. The company introduced it in September 2017 and manufactures and ships the product from a cGMP-certified facility.

The contact information for Jacked Factory is as follows:

Jacked Factory claims that Burn XT is a cutting-edge thermogenic fat burner that speeds up the metabolism, suppresses the appetite, and increases energy. Specifically, the company claims that the ingredients encourage natural thermogenesis.

Thermogenesis is a metabolic stimulation within cells that increases heat and energy expenditure. In theory, this increase in metabolic activity raises basal metabolic weight, thereby resulting in fat loss. Most companies refer to thermogenic ingredients as simply “fat burners.” According to a study in Obesity Reviews, the most popular “fat-burner” or “fat-burning” ingredients are powdered caffeine and green tea.

The company claims that Burn XT is a thermogenic fat burner that works in three ways: burn fat, boost energy, and suppress hunger pangs. According to the company, the three-stage thermogenic process occurs because the ingredients create a synergistic formula that increases metabolism shortly after any meal.

Ingredients like caffeine and green tea may help temporarily increase metabolism, according to the Journal of Functional Foods. However, research also warns that the body may become insensitive to this type of caffeine over time or with excessive use. Ingredients like acetyl l-carnitine may work to build muscle, but scientists also note that you could probably get the same amino acids from consuming lean proteins or legumes.

According to the company, the main Burn XT benefits are that it can increase fat loss and boost metabolism. Other purported benefits include increased energy levels, more lean muscle, appetite suppression, and improved mood. Is Burn XT a natural supplement? It’s one of the few products on the market that does not use fillers or dyes. Instead, they use bioavailable ingredients for long-lasting results.

Various thermogenic reviews have yielded mixed results. Some reviewers reported that the fat burner helped them feel more alert and focused during workouts. However, others said that the caffeine in the formula only had a mild effect on the appetite and did not result in any noticeable fat loss.

Burn XT’s primary selling point is the claim that it can raise basal metabolic rate and burn fat (ultimately leading to weight loss). Regular exercise and consumption of the ingredients in the whole-food form (chili peppers, green tea) may help with fat oxidation from a nutritional standpoint. This combination of exercise and fat-burner foods can create a calorie deficit to help you lose weight.

However, most reviewers caution that Burn XT is not a “magic pill” that results in weight loss without exercise. Due to the high caffeine, some have even speculated that it first acts as a diuretic for water weight before having any real impact on stored fat.

Where to Buy Burn XT

How to Take Burn XT

If you are interested in taking Burn XT, the company recommends taking a capsule each day during a meal. You should not take this stimulant-based supplement within four hours of bedtime or exceed a maximum dosage of four capsules per day.

As with many fat burners, people interested in this product invariably ask, “Is Burn XT safe?” Burn XT thermogenic reviews on Amazon report that while it seems generally safe, some users experienced enough stomach pain to consult with their physicians.

The most commonly reported Burn XT thermogenic fat burner side effects to include the following:

Some individuals are also sensitive to L-carnitine. Since Burn XT contains a significantly potent dosage of acetyl-l-carnitine, people with this sensitivity should not take the supplement.

Individuals researching the Jacked Factory brand often compare Burn XT vs. Lean XT. While Burn is primarily a fat burner, Lean is a supplement used for building lean muscle. Jacked Factory advertises that you can stack the two during the day or take it with a meal and take Lean PM just before going to bed.

Shoppers have also compared Burn XT vs. Hydroxycut. Because Hydroxycut is a controversial product linked to fatality in some users, the first question is whether Burn XT is safer to use. The toxicity of Hydroxycut may come from its high concentration of undisclosed, botanical herbs.

Fortunately, the supplement does not use a proprietary herbal formula like Hydroxycut. Instead, it contains only five main ingredients (most of which are stimulants).

“I actually enjoyed Burn-XT quite a bit. It gave me a solid kick in the early a.m. (5ish) to get out to exercise, it gave me no jitters, or excess sweats associated with several thermogenics. Coming from the world of the ECA stack (RIP), this is a great alternative.”

“I’ve been taking this for about 3 weeks now. I was hoping my body would adjust to it but it did not. There’s some days where I’ll feel fine, but there’s other days where I feel super lightheaded and nauseous. I had to throw them away because it’s not worth the way it makes you feel and it does not give me energy or suppress appetite at all. If anything, I’ve actually been feeling sleepier.”

“About 4 weeks in and while the weight loss part hasn’t changed much, I definitely notice a bump in energy from using the Burn XT and I don’t feel so hungry all the time. I think after consistent and continual use I can see this making a difference.”

The Bottom Line on Burn XT

Burn XT claims that its thermogenic formula speeds up the metabolism, decreases appetite, and increases energy. While it does contain stimulants associated with fat burners, reports of fat oxidation or weight loss vary widely. Also, it is not a practical choice for people who are sensitive to high doses of stimulants.

We are in full support of living a healthier life, and we also know that means being at your healthy weight. Sometimes, the changes that are needed are difficult, but they don’t have to be with a clinically-proven system in place.

One of the best weight-loss apps we have seen is one called Noom. With personalized meal plans, coaching, and customized health information, Noom makes it easy to make healthier choices, lose weight, and understand your own eating habits.

For a limited time, Dietspotlight readers can get a free trial offer with 100% access to everything Noom has to offer. 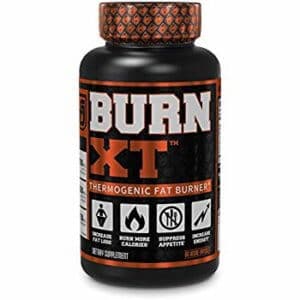 clear
Q:
Is Burn XT for weight loss?
A:

Burn XT claims to be a supplement designed for helping users lose weight.

Q:
What are the Burn XT ingredients?
A:

Q:
Are there Burn XT side effects?
A:

Some common side effects associated with the ingredients may include Dry Mouth, Excess Sweating, Nausea, Stomach Cramps or Pain.

The safety of Burn XT will differ from one person to the next. It may be generally considered safe for some people, yet others could have reactions to some ingredients.

Burn XT is designed for both men and women.

Burn XT can be purchased using their Official Site.

Burn XT can be purchased on Amazon and it’s official website.

Q:
What is the most common Burn XT complaint?
A:

Burn XT is not applicable people with stimulant hypersensitivity. Results are not consistent. They vary too much.

Q:
What are some similar products to Burn XT?
A:

When starting Burn XT, you should consume one capsule a day to test your tolerance levels. You can consume up to 2 capsules 1-2 times a day. Each dosage should be separated by at least 4-6 hours.

Q:
How much caffeine is in Burn XT?
A: