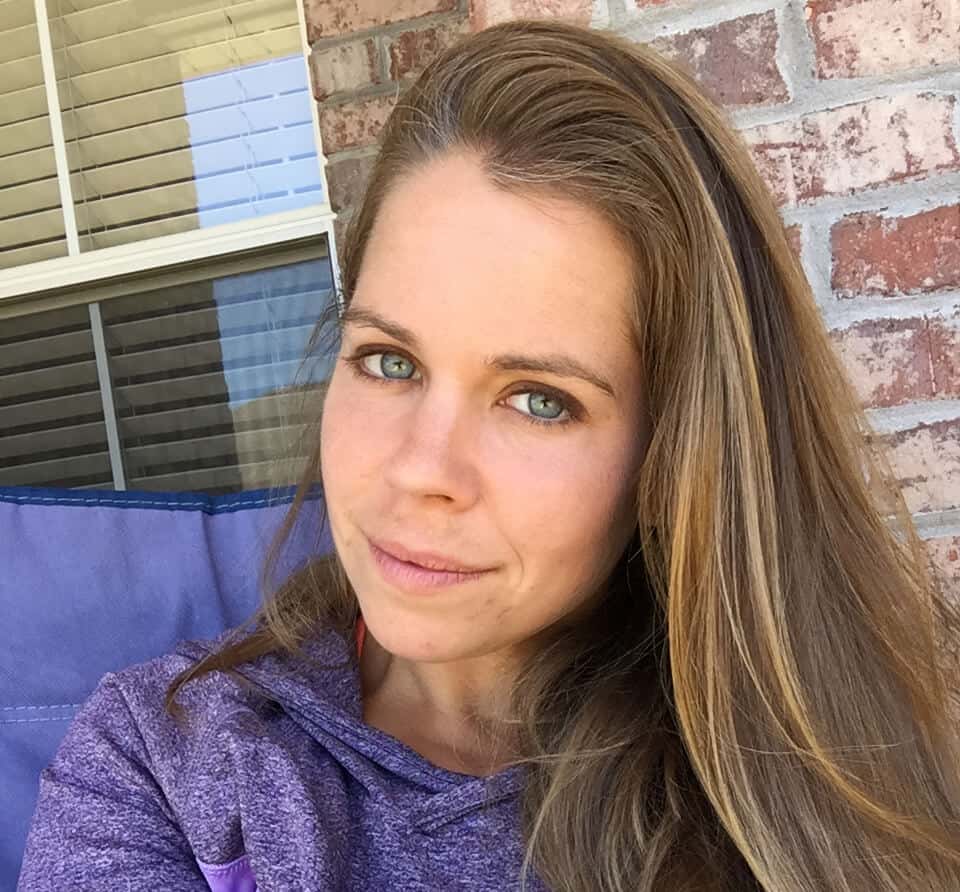 By Julia Steier, CPT, FNS on Jan 04, 2022
Home / Health Articles / 4 Reasons to Ditch the Fitness Tracker and Listen to Your Body

You’ve decided to start living a healthier lifestyle. One year ago you started tracking your food consumption with a free fitness tracker app, such as My Fitness Pal tracker.

You’ve decided to limit alcohol intake, cut back on refined carbs, and started saying no to sweets. You joined a gym, bought a fitness tracker, and started steadily collecting Splat points or whatever minutes in the orange and red zones you achieve.

The weight slipped off of you so quickly in the beginning, but for some reason, your weight loss has tapered off. What’s up with that? In just a year, your total weight loss is 12 pounds.

You feel good despite the lack of change on the scale. You’ve been listening to the trainers when they say push, or go for two more reps, but your BMI still sits on the overweight end. So how do you get that extra nudge, so the scale begins to move again?

It might be time for a change. Your body has adapted to the workload; it’s bored and it’s getting tired. Your body is speaking to you, but you’ve been ignoring it because you believe in the fitness tracker.

Trackers are great, they’re wonderful, but they’re also dishonest. It says you’re burning upwards between 600-1000 calories in one session alone and you go three to four times a week. 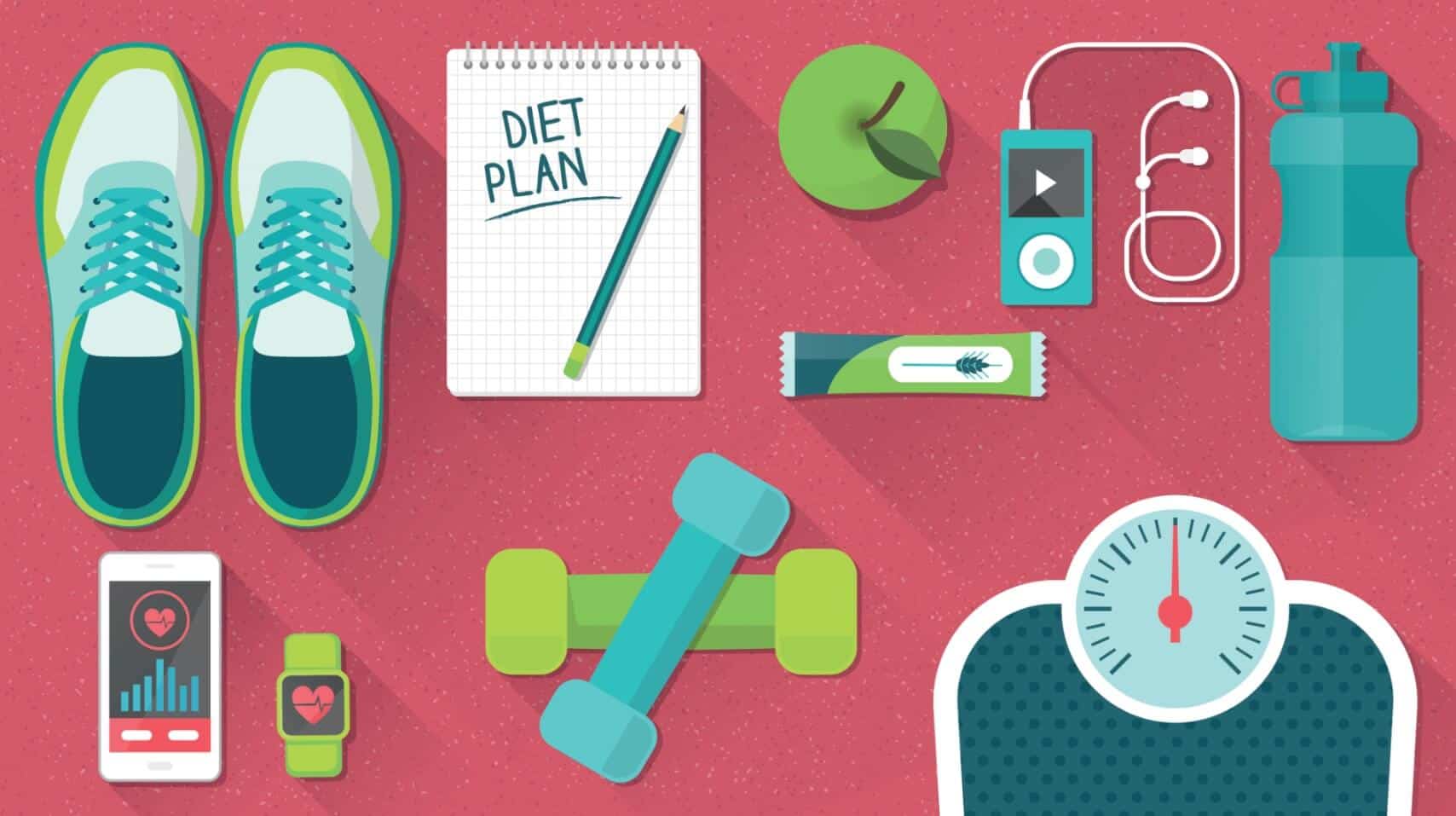 So you’re potentially burning 2,400-4,000 calories with exercise per week. More weight should be coming off, seeing one pound is equivalent to 3500 calories.

Something is not adding up, and it’s time to figure out why spending hours on the treadmill, rowing machine, or elliptical that’s not translating to fat burn and weight loss. You can only use the excuse “muscle weighs more than fat,” for so long.

It’s time to break up with the fitness tracker and listen to your body.

Fitness Tracker – We should take a break; It’s me, not you.

To be entirely forthright, your fitness tracker doesn’t measure anything accurately except for your heart rate. From a study of 7 different fitness trackers (see Journal of Personalized Medicine), 6 of the 7 measured heart rate with an error rate of less than 5 percent. 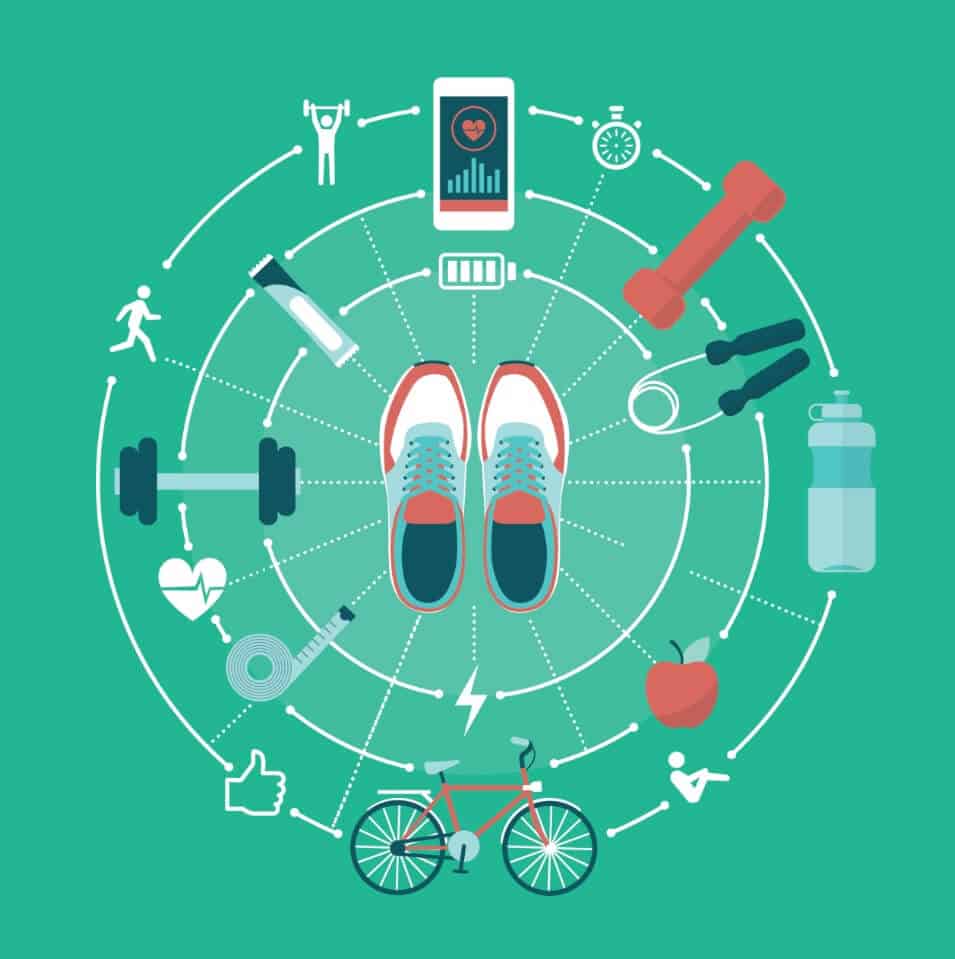 Another fitness tracker was off by close to 93 percent. So, when you measure your worth in calories burned or are a member of a gym you pay way too much for to stare at your heart rate on a screen, just remember that number might need to be sliced by a third.

So let’s burn some misconceptions about your fitness tracker. Let’s look at four reasons why it might be time to start listening to your body and stop paying attention to the fitness tracker. 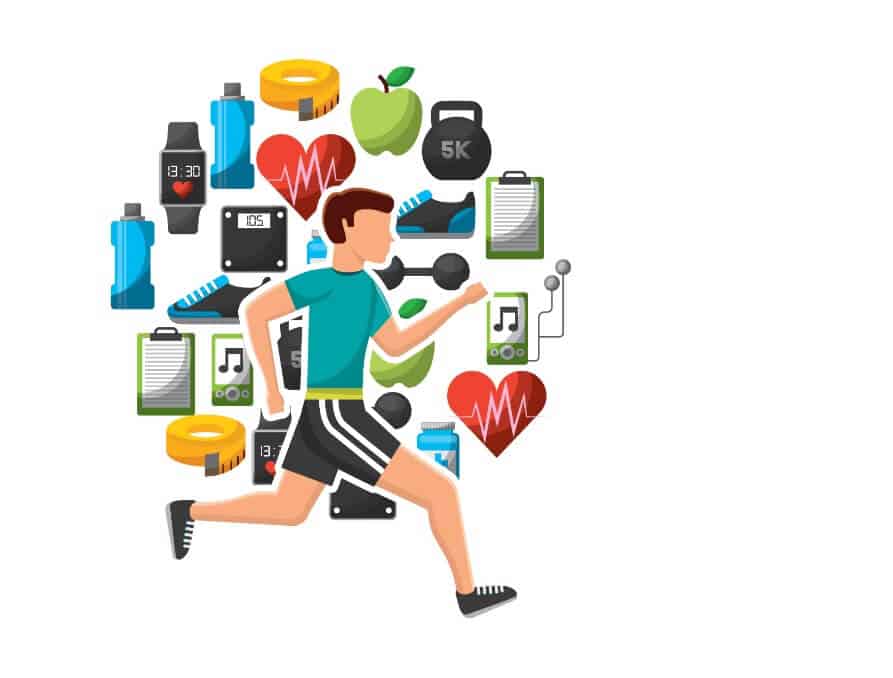 You’ve collected 24 splat points, saw your heart rate in the red zone for 22 out of the 60 minutes, you’ve burned 963 calories and now it’s time to feast!

Hold on a second. If you dictate your food consumption based on what your estimated caloric output is, you might be overeating, which could derail your healthy living.

You will lose weight if you reduce calories. Which means you are burning and using more calories in a day than what you are taking in. An important component to this is knowing your basal metabolic rate (BMR).

Your BMR is significant in all of this because it is the number of calories you need to keep your body functioning while at rest.

If your BMR is 1500 and you then burn 600 calories with exercise, to sustain your current weight consuming 2100 would work.

But, if you are looking to lose a pound a week or a pound every two weeks, being in a caloric deficit of 250-500 would work for you.

Subtract 250-500 from 2,100, and that’s your estimated caloric intake, as long as you are still exercising.

However, if you are in a calorie deficit for an extended period, you won’t continue losing weight. This can result in cutting calories for too long.

2.) Can a Fitness Tracker Causes You to Cut Too Many Calories?

For those on the opposite end of the spectrum, who begin tracking calories with an app that syncs up to the fitness tracker, this can propel them into achieving immediate weight loss.

With the caloric deficiency, there will be weight loss, but quick weight loss can be traced to water weight and glycogen stores. However, to maintain a steady weight loss, there needs to be a degree of progression with workouts.

Greater volume, higher workload, longer duration, whatever it is, it has to develop continuously. As your body gets stronger, you could reach a point where your weight loss begins to taper off or stop altogether. 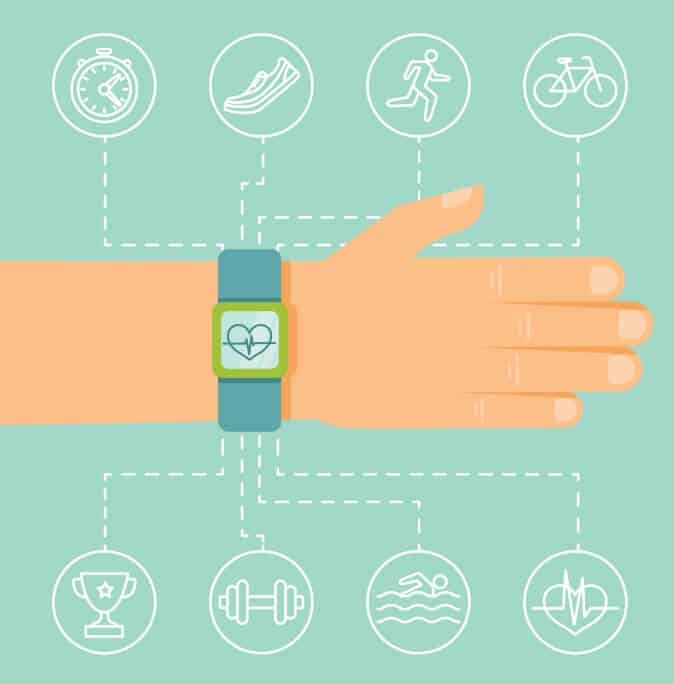 It can be linked back to your body adapting to the calorie restriction. And, if there isn’t change, the weight loss plateau is your body’s way of telling you to make a change. Regardless of what the fitness tracker reads.

If you hit a weight loss plateau, you need to listen to your body. It will continue to signal to you with:

You know all the symptoms of overtraining syndrome.

Overtraining Syndrome (OTS) can develop into a real illness and it has been an increasing epidemic among gym goers who feel they need to do High-Intensity Interval Training (HIIT), such as Strong by Zumba,  every single time they step foot into a gym.

Trackers have created mass hysteria to burn as many calories as possible, or in the case of famed author David Sedaris, to log as many steps until his Fitbit breaks.

The holy grail of caloric output has created a fitness tracker-thirsty gym culture that neglects correct form to achieve the fullest burn.

When this happens, individuals can revel in the attention from the head trainer to showcase their accomplishments on a brag board, PR board or be featured in the weekly Facebook post.

Achieving the elusive caloric output of 1,000 in 45 minutes has morphed people into believing they can work out past point of fatigue and venture into a new realm of OTS.

This new digital phenomenon is causing increased injuries because of the lack of correctness in exercising and also performing HIIT when fatigued. 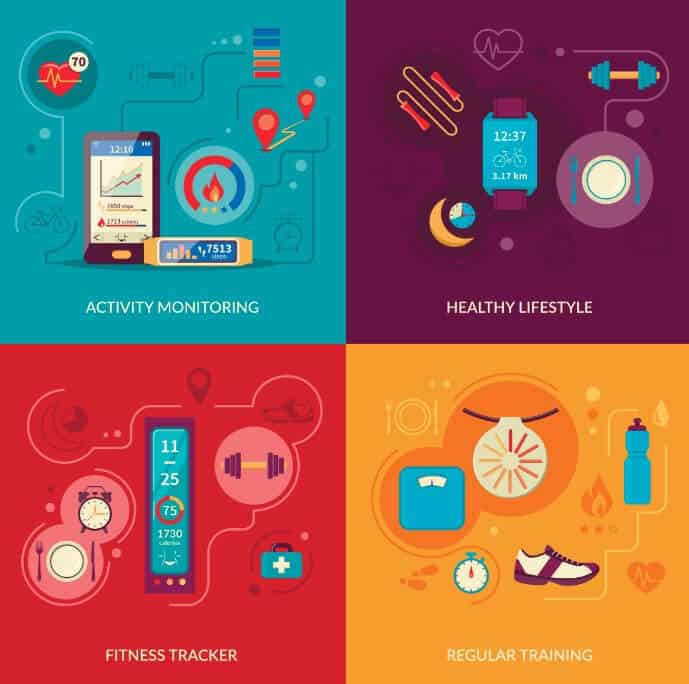 This has been studied and documented to happen more among millennials who report suffering from increased hip injuries and rhabdomyolysis (rhabdo) (see research in Muscle Nerve).

To achieve a maximal caloric output, people are putting too much wear and tear on their bodies which has long-term ramifications.

Once a person enters into overtraining syndrome, fatigue is constant. Your body begins to break down because of lack of recovery, rest, and recuperation. Finally, performance starts to decline.

“Too often those exercise devices… basically LIE about how many calories burnt, if they told the truth they’d not be as popular. They do usually tell truth on how “far” you walked or cycled, and give fairly accurate pulse readings, but when it comes to “calories burned” just ignore that.”

“This is about accountability. The app and the device made it simple to develop and maintain good habits. It recommend for anyone that is stuck in an endless cycle of dieting. You need to measure everything to develop the habits to maintain long-term discipline.” 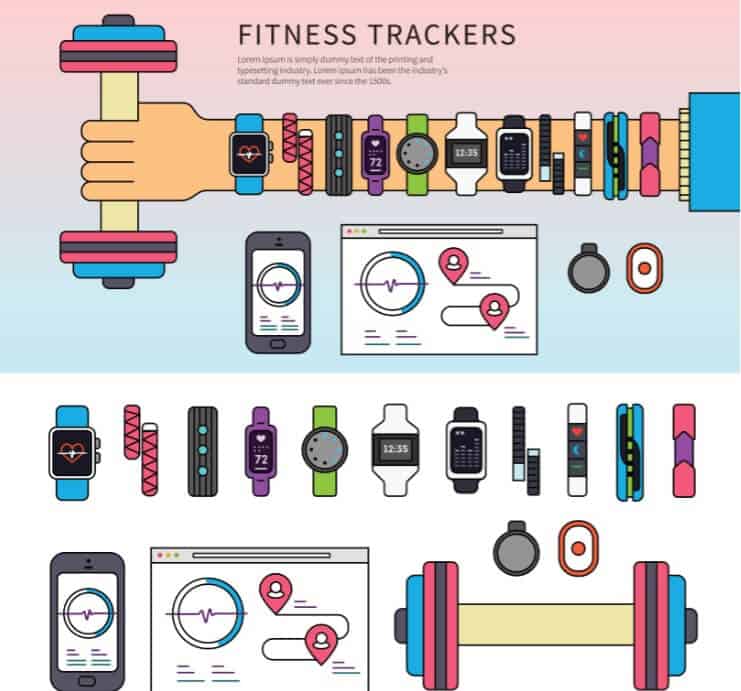 4.) The Best Fitness Tracker and GAS

General Adaptation Syndrome (GAS) is not a result of overtraining syndrome. It’s broken down into three stages:

All of these stages are a how the body responds to stress.

Well, unless you have the newest velocity-based fitness tracker, it isn’t keeping an eye out for your overall well-being and progress.

Your body senses change, so it increases oxygen and blood supply, similar to the purpose behind SuperBeets. It also releases hormones and begins to recruit other muscles to help meet the demands of the stressors.

Often, there is a delayed onset of muscle soreness (DOMS) in the alarm phase. This is something Kill Cliff aims to stop. Alarm phase can change depending on the acute variable applied to a workout, like incorporating suspension training.

But, then again, your fitness tracker doesn’t realize the importance of recruiting motor units. It’s made to keep heart rate and track calorie burn.

So go fast, get your heart rate up, get the most rounds in the allotted time, form makes no difference because calories must be incinerated. 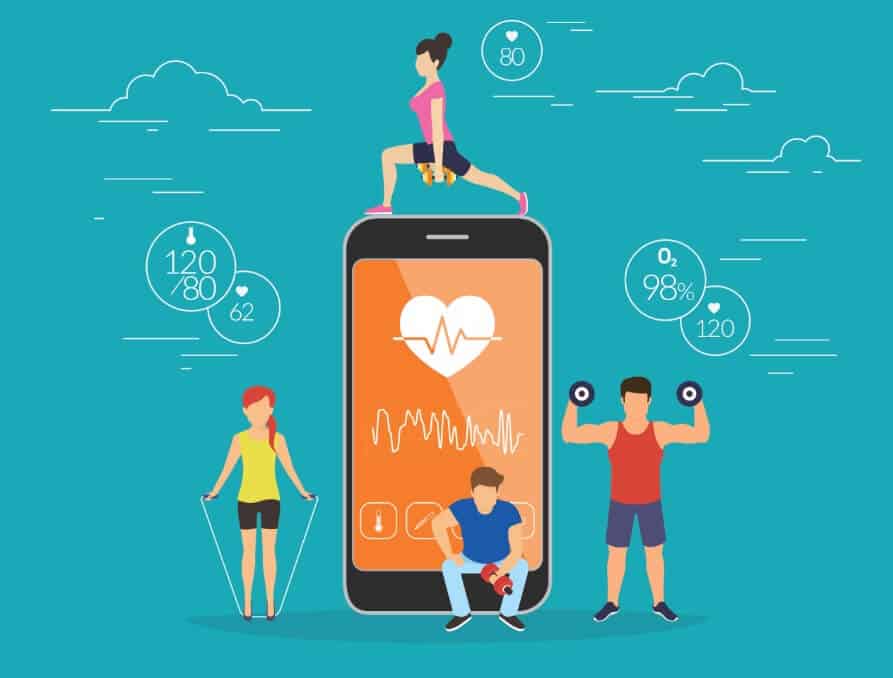 When your body becomes familiar with the stress and has figured out how to distribute blood and oxygen throughout the body properly, and cortisol begins to level off, and finally, your muscular system recruits the proper muscles to handle the stress.

This is important in GAS, because this is the time where there needs to be changed. If you want to produce a new response, there needs to be an increase in volume and workload. This is a part of the principle of progression.

A good way to monitor this is when you realize your heart rate might not get into the brag-worthy red zone. It’s not going there because of lack of hard work, and it’s not getting there because you have strengthened your cardiovascular system.

A realistic change might be to shorten the duration of exertion and increase resistance. For example, on a spin bike similar to SoulCycle, add another quarter turn to your flats during your Tabata sprints.

See how it changes your breathing and legs. Don’t worry about the total calories, instead feel the changes as they are happening.

When added stress leads to fatigue. This doesn’t have to be just physical fatigue; it can also be emotional and psychological. Remaining in the Exhaustion phase can result in stress fractures, muscle strains, prolonged fatigue, joint pains, lack of motivation and of course develop into overtraining syndrome.

If you feel you are under performing, you might need to consider adding rest day or two, or three. To be your best, you must rest.

Muscles can begin to breakdown, so again, listen to your body and read the signs. Failure to perform is your body’s way of letting you know it’s time to take a break.

Your fitness tracker doesn’t measure how quickly you adapt to workouts. Instead of reading the numbers and measuring your exercise performance based on the fitness tracker, realize your body will cue you into how to best navigate and adapt to the labyrinth of healthy living.

Julia Steier, C.P.T., F.N.S, is a former NCAA Division I athlete and has been working in NCAA intercollegiate athletics for 10 years. Inspiring student-athletes to dream big and push themselves through training, Julia has coached many athletes over the years to becoming Regional and National All-Americans. Julia has lost over 65lbs and is living her best life now. She used fitness to deal with the grief of losing her husband, which has become her passion for motivating, inspiring and encouraging those around her to work towards finding the best versions of themselves through a healthy lifestyle. Julia is featured in Runners World, Women’s Health and more.